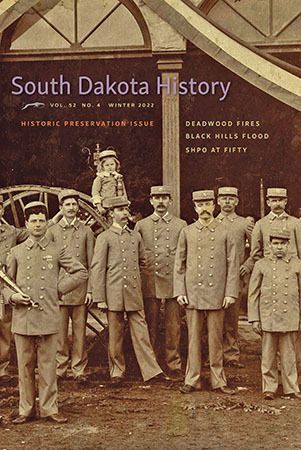 David A. Wolff’s article “From Disaster to Prosperity: Four Fires that Changed Deadwood” examines the aftermath of destructive blazes in 1879, 1889, 1894, and 1987. In each case, Deadwood residents and civic leaders responded creatively and made changes that helped stabilize the city. Wolff, an emeritus professor of history at Black Hills State University in Spearfish, is an expert on Black Hills history. He is the author of three books, including “The Savior of Deadwood: James K. P. Miller on the Gold Frontier,” which the South Dakota Historical Society Press published in 2021.

In “The 1972 Black Hills Flood and the Remaking of Rapid City,” Corey Christianson details how the city responded in the wake of a disaster that caused more than 200 deaths and displaced thousands more. The article shows how the city’s rebuilding efforts emphasized residents’ safety while also leading to a massive expansion of the city’s greenway system. Christianson is the collections management specialist for the South Dakota State Historical Society and a researcher for the Journey Museum in Rapid City.