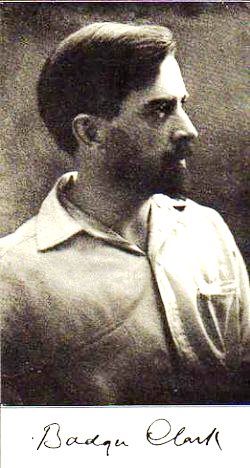 Visit our store for Badger Clark books and materials.

It was the less colorful merchants, ranchers, schoolteachers, preachers - and their descendants - who must be given credit for actually settling the territory. These are the so-called "little people" we give lip-service to while secretly wishing for tales of Calamity Janes' bull whacking days or Jack Langrishe's touring theater troupe.

Already a well-known and well-liked character by the mid-thirties, Badger received permission to build a cabin on state-owned land in Custer State Park. The game preserve was a natural for this early conservationist, who despite his cowboy background could never bring himself to hunt or fish. The cabin was five years in the building and became one of the strangest "hermitages" ever divided by man.

Although a lifelong bachelor, Badger Clark was a very social animal and the four-room cabin with a front porch stretching the entire width of the building, was expressly designed for entertaining. And as he had hoped, a steady stream of friends and admirers made the long trek into the wilderness to listen to his adventures in Cuba or tales of his life on the disappearing range.

Badger Clark lived a long and productive life that should not be appraised by literary output alone. The poems are good on the whole; one or two perhaps will be judged by time to be great. As a body, they invoked a time and a way of life in the great West which is lost to us forever and which he had the great good fortune to experience firsthand. There are three volumes of poetry (one printed posthumously), a novel, and numerous articles and pamphlets - not an impressive sum for an entire lifetime. But to condemn Badger Clark for his apparent lack of industry would be a mistake. He was far less interested in writing than in studying and caring for his tame deer, cultivating his many close friendships and, most importantly, enjoying the great out-of-doors.

Want to read more?  Enjoy this article, "Saddle Up With Badger Clark, America’s Forgotten Cowboy Poet," in the Smithsonian magazine.