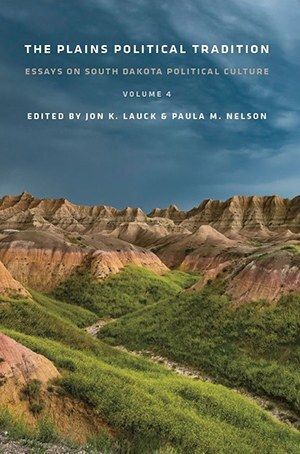 The next book from the South Dakota State Historical Society, The Plains Political Tradition: Essays on South Dakota Political Culture, volume 4, is now available for preorder at sdhspress.com.

This fourth installment of The Plains Political Tradition series builds on the previous three volumes, providing insight into the antecedents that made South Dakota a political anomaly in comparison with some of its neighboring states. Throughout this series, the understanding of political culture has remained an eclectic one, encompassing elements of both thought and behavior. In addition to attitudes, beliefs, assumptions, values, and ideology, it includes roles, symbols, practices, procedures, habits, traditions, organizations, and institutions, among other things.

Writers in The Plains Political Tradition series have filled in many of the details with analyses of politics and religion, education, transportation, women’s issues, immigration, ethnicity, Native Americans, economic development, and other subjects. Studying literature, environmentalism, war and peace, local government, U.S. Senate and gubernatorial elections, business, farm organizations, planning, and geography, these authors probed many of the nooks and crannies of South Dakota’s political culture and greatly added to our knowledge of the assumptions, ideas, mechanisms, organizations, and processes of statewide politics.

The Plains Political Tradition, volume 4, may be ordered for $34.95, plus shipping and tax, at sdhspress.com. Booksellers may contact orders@sdhspress.com to place orders for their businesses.