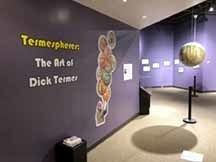 “Termespheres: The Art of Dick Termes” is now open at the Cultural Heritage Center in Pierre and runs through Aug. 29.

Termespheres are 3D art objects that capture an entire environment – up, down, left, right, front, and back – to depict a complete, closed universe. The exhibit features 13 Termespheres.

Raised in Spearfish, SD, Dick Termes earned an art degree from Black Hills State University in 1964, a master’s in art in 1969 from the University of Wyoming, and a Master of Fine Arts at the Otis Art Institute of Los Angeles County in 1971.

Termes taught at Black Hills State University before joining the South Dakota State Arts Council in 1972 as an Artist in the Schools. Eventually he pursued his art on a full-time basis and in 1992 opened the Termesphere Gallery. Termes received the Governor’s Award for Distinction in Creative Achievement in 1999 and was inducted into the South Dakota Hall of Fame in 2014.

There will be an artist meet-and-greet on Saturday, June 25, at 1 p.m. CDT (12 p.m. MDT) followed by a video/lecture. Termes will show examples of his Termespheres, Polyhedra Paintings and the Total Photos along with short videos of the Termespheres he has painted over many years. He will explain why and how he painted these pieces and share fun stories about his work.