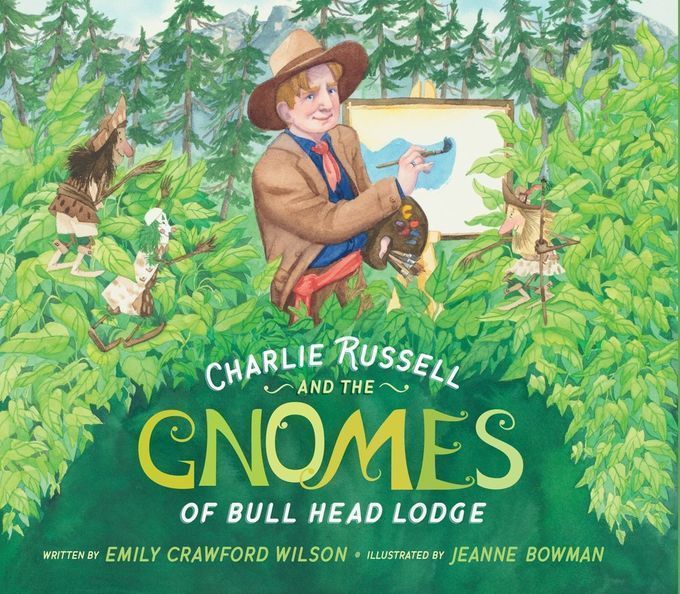 “Charlie Russell and the Gnomes of Bull Head Lodge,” published by the South Dakota State Historical Society, has won a Spur Award from the Western Writers of America.

The story "whisks readers away to a clean-aired place where a crunch and crackle among the pine needles might be the western wind ... or perhaps mischievous gnomes,” writes Karen McWhoter, Scarlett Curator of the Whitney Western Art Museum at the Buffalo Bill Center of the West. “Whimsical illustrations complement the lyrical prose of a story spun with magic but based in fact."

Western Writers of America annually honors writers for distinguished writing about the American West with the Spur Awards. Since 1953, Spur Awards have been considered one of the most prestigious awards in American literature.

Crawford Wilson and Bowman both share a love of the outdoors and dreams of the magical possibilities found playing in old-growth forests. Crawford Wilson is the former senior curator of art at the C.M. Russell Museum in Great Falls, Montana, where she developed numerous exhibitions of Russell’s artwork and wrote many articles about the landscape and people who influenced him. Bowman studied art at Rocky Mountain College in Billings, Montana.

Not only did Russell paint, but he also used found objects to create nature-based sculptures. These artifacts of his creative mind, his gnomes, along with the thousands of letters he wrote, helped Wilson develop her story, and she hopes to inspire creativity in readers. At the back of the book is a “Build-A-Gnome” craft that encourages children to use found objects in constructing their own magical creatures. Wilson also provides information relating to Russell’s history.

“Charlie Russell and the Gnomes of Bull Head Lodge” can be ordered for $19.95, plus shipping and tax, at sdhspress.com. Booksellers can contact orders@sdhspress.com to place orders for their business. For more information about the South Dakota Historical Society Press and its books, please visit sdhspress.com and follow @sdhspress on Facebook, Instagram, and Twitter. Find out more about the Spur Awards and the Western Writers of America at westernwriters.org. For information on membership in the State Historical Society, visit history.sd.gov or call 605-773-6000.