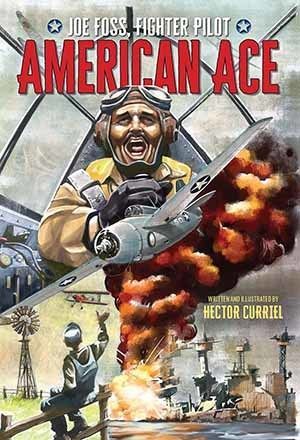 Artist Hector Curriel’s new book from the South Dakota State Historical Society, “American Ace: Joe Foss, Fighter Pilot,” is packed with trials and triumphs as his subject, a future South Dakota governor, overcomes difficult and dangerous situations at the height of battle in the Pacific during World War II.

“Hector Curriel draws readers into his subject’s experience using pen and ink,” says Dr. Ben Jones, state historian and South Dakota State Historical Society director. “By using the escapades of Foss during World War II, Curriel showcases the experience of many fighter pilots, while highlighting the perseverance that made this man unique.”

“American Ace” places action at the forefront as Joe Foss is shot down twice, contracts malaria, and loses his friends and comrades in battle.

From the time he was 4 years old, Joseph Jacob “Joe” Foss (1915–2003) found flight fascinating. As an adolescent, he followed the career of flyer Charles Lindbergh and could hardly wait to get into the air himself. In college, he took private flying lessons, and as war broke out across Europe in 1939 and 1940, he joined the South Dakota National Guard, preparing himself for combat by earning more flight time on weekends.

After graduation, Foss joined the United States Marines Corps flight training program. Finally, in 1942, Foss was ready to be a fighter pilot, just as he had always dreamed of being. But he was now 26 years old, and the military deemed him too old for combat. Instead, the Marine Corps assigned Foss to teach men 18-23-years-old how to fly.

Foss accepted his role but also volunteered for special assignments. He became a reconnaissance photographer, hoping the job might lead him to the battle front. He pestered his superiors until he was allowed to take combat training in the Grumman F4F Wildcat, the carrier-based dogfighter of the Pacific theater. Still he found himself stateside rather than at the front. He continued to volunteer for dangerous assignments, and his determination eventually won him a spot in a fighting unit just as the war in the Pacific heated up.

Joining the Marine Corps’ VMF-121 fighter squadron as executive officer, Capt. Foss and his unit shipped out to Guadalcanal, code-named “Cactus,” in the Solomon Islands. They arrived in early October 1942, just weeks after the Allies had taken Henderson Field on Guadalcanal from the Japanese. By mid-October, Foss had shot down five enemy airplanes, which officially made him a flying ace. With his leadership and his pilots’ daredevil tactics, the VMF-121 became known as Foss’s Flying Circus, the heart of the Cactus Air Force. Shooting down a total of 26 enemy planes between Oct. 10, 1942, and Jan. 25, 1943, Foss became America’s Number One Ace and earned the Congressional Medal of Honor for his role in Guadalcanal. He was a hero known around the world for his prowess in the skies

Curriel is an illustrator, watercolor artist, and cartoonist. Born in Lima, Peru, he now lives in Sioux Falls, South Dakota.

“American Ace: Joe Foss, Fighter Pilot” is written for high school and adult readers. It can be preordered for $19.95, plus shipping and tax, at sdhspress.com. Booksellers can contact orders@sdhspress.com to place orders for their business. For more information about the South Dakota Historical Society Press and its books, please visit sdhspress.com and follow @sdhspress on Facebook, Instagram, and Twitter. For information about membership in the State Historical Society, call 605-773-6000.