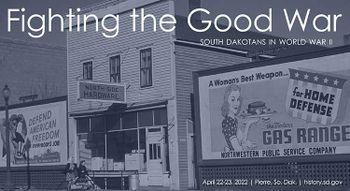 The South Dakota State Historical Society’s 2022 History Conference and Governor’s Awards for History is taking place April 22-23, at the Pierre Ramkota Hotel and Convention Center. Both in-person and virtual options for attending are available. Early bird registration ends on March 15. Register and find out more at history.sd.gov.

“Fighting the Good War: South Dakotans in World War II,” brings in speakers from across the country and South Dakota to remember the human stories surrounding the so-called “Good War” 80 years after the United States joined the battle. Sessions will center on Marcella LeBeau, Kenny Higashi, John P. (“Pat”) Flynn, Doolittle Raider Don Smith, Gov. Joe Foss, and the experiences of other men and women as recorded by the South Dakota Oral History Center and Black Hills Veterans Oral History Project, along with discussions of artifacts from the war in the South Dakota State Archives and Center for Western Studies collections.

“World War II is one of the twentieth century’s most impactful events,” says Dr. Ben Jones, state historian and director of the State Historical Society. “Eighty years on, we can listen to firsthand accounts through recorded oral histories, and we can explore artifacts held in archival collections to gain a better understanding of the experiences of everyday people who became soldiers, medics, pilots, and more to defend their nation and their way of life.”

The Friday, April 22, conference reception at the Missouri Avenue Event Center will feature a presentation by historian Dr. Kurt Hackemer on cartoon propaganda during World War II. The cartoons that colored American perceptions of the war from the likes of Walt Disney will be played. Attendees can also view artwork from two illustrated books, “American Ace: Joe Foss, Fighter Pilot” and “A Place for Harvest: The Story of Kenny Higashi,” published by the South Dakota Historical Society Press and newly available at the conference. Authors and illustrators will be signing books at the event.