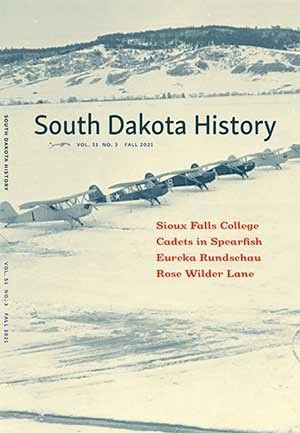 Sioux Falls College, cadet training in Spearfish, German-language newspapers and the writings of Rose Wilder Lane are highlighted in the latest issue of “South Dakota History,” the quarterly journal of the South Dakota State Historical Society.

Stephen Jackson’s article “‘Both Sides of the Mountain’: Growth and Volatility at Sioux Falls College, 1953–1978,” explores the development of Sioux Falls College—now known as the University of Sioux Falls (USF). Jackson analyzes the efforts of President Reuben P. Jeschke and other college leaders to overcome financial difficulties and expand both enrollment and the physical campus. Jackson is an associate professor of history at USF. His most recent book is “Religious Education and the Anglo-World” (Brill, 2020).

“A Quest for Mental Ammunition: The Ninety-Third U.S. Army Air Forces College Training Detachment in Spearfish, 1943–1944,” by Paul Higbee and Terry Neil King, documents the history of an Army Air Force college training detachment that prepared cadets for service in World War II. Black Hills Teacher College, which hosted the unit, transformed itself to welcome these visitors, as did the town of Spearfish. Higbee is a retired South Dakota educator and the author of seven books. He has been a South Dakota Magazine contributing editor and columnist since 1992. King, a Colorado native, worked at United Airlines for more than three decades. His father, Neil King, served as the detachment’s adjutant.

In “‘Whatever our language, we have the same flag’: The Eureka Rundschau, 1915–1927,” Istvan Gombocz analyzes a popular German-language newspaper in McPherson County, S.D. The Eureka Rundschau helped Germans from Russia craft and maintain a dual identity, especially during the tense World War I era. Gombocz is currently a professor emeritus of German at the University of South Dakota. He studies the culture and literature of German minorities in Eastern Europe.

Nancy Tystad Koupal’s expertise on the Wilder family informs her article, “Rose Wilder Lane on Railroads and the Winter of 1880–1881: Excerpts from ‘Behind the Headlight: The Life Story of a Railway Engineer.’” The article explores Rose Wilder Lane’s early career as a writer. It includes annotated excerpts from a serial that Lane published in the San Francisco Bulletin in 1915, describing a famously harsh winter that would inspire her mother Laura Ingalls Wilder’s “The Long Winter” (1941). Koupal was the founding director of the South Dakota Historical Society Press. She currently serves as the director and editor in chief of the Pioneer Girl Project.