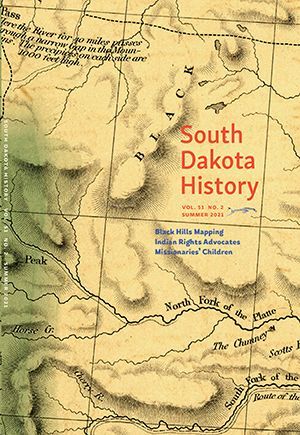 Elaine Marie Nelson’s article, “‘No where to be found’: Myth-Mapping, Empire, and Resistance in the Black Hills Country, 1800–1860,” explores the relationship between the creation of non-Native maps and how Americans understood Black Hills geography. For most 19th century Americans, the size and location of the Black Hills was ambiguous and fluid. Based on Indigenous knowledge, Nelson argues, white soldiers, settlers, and explorers formulated maps and stories to claim the Black Hills as part of a growing U.S. empire. Nelson is an assistant professor of history at the University of Kansas and the executive director of the Western History Association.

“Charles C. Painter’s ‘How We Punish Our Allies’: Advocating for Gabriel Renville and the Sisseton and Wahpeton Dakota Scouts” by Valerie Sherer Mathes examines the efforts of Charles C. Painter, an agent for the Indian Rights Association, to restore financial annuities owed to the Sisseton-Wahpeton Dakota scouts and soldiers who served with the U.S. Army during and after the U.S.-Dakota War of 1862. In Painter’s pamphlet, “How We Punish Our Allies,” which is reprinted in the journal, he argued for the fair treatment of the scouts for their service, a major piece of the Indian Rights movement of the late 19th century. Mathes is a professor emerita at City College of San Francisco and has published extensively on the history of American Indian reform.

In “‘Substitute in this army of the Lord’: Missionary Parents, Their Children, and the Conflicted Nature of Missionary Work,” Linda M. Clemmons analyzes the lives and choices of children born to missionaries in the Dakotas. Religious leaders in the mid-19th century saw children, who had early experiences with Dakota culture and language, as particularly suited to join the profession. Their parents, however, worried that raising children on the frontier would harm their morality and piety. Clemmons is a professor of history at Illinois State University.