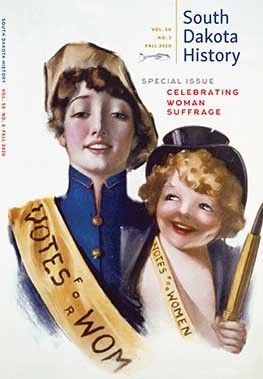 A special issue of “South Dakota History,” the quarterly journal of the South Dakota State Historical Society, highlights the centennial of the ratification of the 19th Amendment to the United States Constitution, which granted most women equal voting rights.

In an article titled “A Century Celebration: Woman Suffrage in South Dakota, 1868–1918,” Ruth Page Jones details the numerous debates over woman suffrage legislation that began during territorial days and continued for 50 years. She tracks the various strategies suffragists used during six major campaigns that eventually led to South Dakota granting women the vote in 1918. Two years later, woman suffrage became the law of the land when Tennessee became the final state needed to approve the 19th Amendment. Jones received her M.A. in history from the University of Wisconsin-Milwaukee and has written several essays on the history of Aurora County, S.D.

In “The Stuff of Suffrage: Selected Ephemera from the Woman Suffrage Movement,” Cody Dodge Ewert highlights the use of mass marketing materials from both pro- and anti-suffragists in the early 20th century. The two groups employed cartoons, magazine covers, posters, postcards, and other objects in an attempt to sway observers to their respective causes. Ewert is an associate editor with the South Dakota Historical Society Press and has a Ph.D. in history from New York University and an M.A. in history from the University of Montana.

Gerard W. Boychuk’s article, “‘Not a Tinker’s Damn’: The Politics of Suffrage in the South Dakota Election of 1918,” explores the arguments used to garner votes for the passage of Amendment E, the woman suffrage amendment to the state constitution. To get the backing of male voters, suffrage leaders connected women’s voting rights to alien disenfranchisement. By promoting themselves as good citizens when compared to immigrant men, they gained enough support to win equal voting rights in 1918. Boychuk is a professor of political science at the University of Waterloo in Waterloo, Ontario.

In a “Dakota Resources” feature, “Woman Suffrage on the Northern Great Plains: An Annotated Bibliography,” Kelly Kirk compiles numerous archival and secondary sources that contain information on the movement in Montana, Wyoming, North Dakota, and South Dakota. The comprehensive listing points readers to sources for further research. Kirk is an instructor of history and director of the University Honors Program at Black Hills State University in Spearfish.

Finally, in “A Note from the Managing Editor,” Jeanne Kilen Ode recognizes the work of Nancy Tystad Koupal, who stepped down this summer as director of the South Dakota Historical Society Press. Koupal began as editor of “South Dakota History” in 1979. Under her direction, the historical society gave historians of the Northern Great Plains a respected venue for publishing their research.