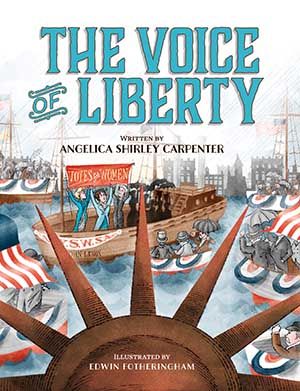 In “The Voice of Liberty,” the latest book from the South Dakota State Historical Society, suffragists organize to give the Statue of Liberty—and themselves—a voice.

The children’s picture book was written by Angelica Shirley Carpenter and illustrated by Edwin Fotheringham.

From the time it was unveiled in New York Harbor in 1886, the Statue of Liberty has symbolized freedom and democracy. If Liberty had been a real woman, however, she would have had no voice in her new country, where women could not vote or run for office.

Kirkus Reviews praised the book designed for readers ages 6 to 9 as a “lively account” filled with “bold, colorful, energetic illustrations [that] capture the time and place well.” The publication went on to call “The Voice of Liberty” a “fine tribute as 2020 marks the 100th anniversary of the 19th Amendment.”

The men in charge of unveiling the statue in New York Harbor went so far as to declare the island off limits to women during the ceremony, but that did not stop New York suffragists Matilda Joslyn Gage, Lillie Devereux Blake, and Katherine (“Katie”) Devereux Blake. They wanted all women to have the liberty to vote and participate in government. To bring attention to their cause, they organized hundreds of people and sailed a cattle barge to the front of the day’s ceremony, making news and raising their voices for liberty.

In addition to the story, the book includes facts about the three women suffragists and the Statue of Liberty, a timeline of women’s rights, a bibliography, an author's note and sources for selected historical dialogue.

Carpenter is active in the International Wizard of Oz Club, the Lewis Carroll Society of North America, and the Society of Children’s Book Writers and Illustrators. She served as director of the Palm Springs Public Library in Florida and the Arne Nixon Center for the Study of Children’s Literature at California State University, Fresno. The South Dakota Historical Society Press also published her acclaimed biography, “Born Criminal: Matilda Joslyn Gage, Radical Suffragist” in 2018.

Fotheringham is an award-winning illustrator, whose numerous picture books include “The Extraordinary Mark Twain (According to Susy),” “Mermaid Queen” and “What to Do about Alice.” He graduated from the University of Washington School of Art in Seattle, where he resides with his family. Fotheringham has worked in nearly every publication medium from punk rock record covers to the New Yorker magazine.

“The Voice of Liberty” is available for $19.95, plus shipping and tax, and can be ordered directly from the South Dakota Historical Society Press at sdhspress.com or by calling 605-773-6009. Follow the South Dakota Historical Society Press on Facebook (SDHS Press) and Twitter (@sdhspress) for more. Visit angelicacarpenter.com to find author event information.