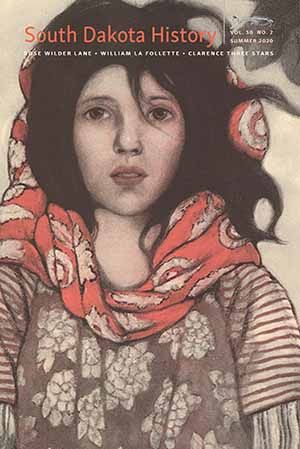 The lives and careers of Rose Wilder Lane, William T. La Follette, and Clarence Three Stars are featured in the latest issue of “South Dakota History,” the quarterly journal of the South Dakota State Historical Society.

In “‘It was in Armenia that I learned fear’: Rose Wilder Lane and the Armenian Genocide,” Sallie Ketcham focuses on Lane’s reporting on events in southeastern Europe and western Asia in the early 1920s. As a journalist working for the San Francisco Call and Post, Lane witnessed the murder, starvation, and mass deportation of Armenians in the Ottoman Empire. Lane is best known for her later role as editor of the Little House books written by her mother, Laura Ingalls Wilder. Ketcham is the author of “Laura Ingalls Wilder: American Writer on the Prairie” and “Fairy Tale, Folklore, and the Little House in the Deep Dark Woods” in “Pioneer Girl Perspectives: Exploring Laura Ingalls Wilder,” among other books and articles.

“Fighting Bob’s Brother: William T. La Follette, Populism, and Agrarian Progressivism” by Jeff Wells examines the career of a little-known South Dakota politician in the late 1800s and early 1900s. La Follette influenced the rise of agrarian populism and progressivism in the state, forming a coalition between the People’s Party and the Democrats. His actions also swayed the political development of his more famous brother, Progressive senator Robert M. La Follette of Wisconsin. Wells is associate professor and chair of the Department of History at the University of Nebraska at Kearney and associate editor of “Middle West Review.”

Philip Burnham’s article, “‘We consider ourselves human beings’: The Education of Clarence Three Stars,” examines the life of a Lakota advocate who lived through a time of significant change. Born before the establishment of the reservation system, Three Stars was educated in Indian boarding schools in the East and died shortly before the Indian Reorganization Act of 1934. As a teacher, lawyer, and tribal leader, he fought for improvements in the lives of the Lakota population. Burnham has a Ph.D. in American Studies and taught at Sinte Gleska University on the Rosebud Indian Reservation. He is a former correspondent for “Indian Country Today.”

The issue, Volume 50, Number 2, also features a remembrance of historian John E. Miller, who died suddenly on May 1, 2020. A professor of history at South Dakota State University for nearly 30 years, Miller became known as the dean of the state’s history, publishing numerous articles and books focused on the region throughout his career.