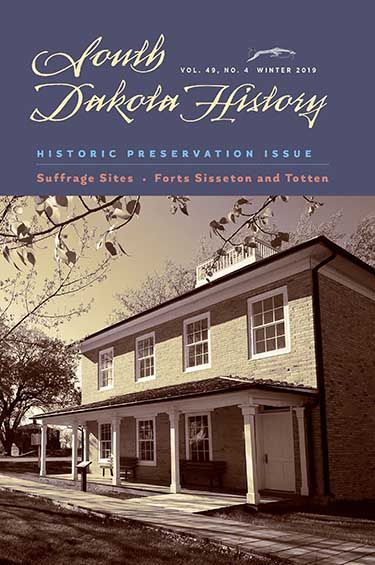 Historic sites related to the woman suffrage movement and the history of Fort Sisseton in South Dakota and Fort Totten in North Dakota are featured in the annual historic preservation issue of “South Dakota History,” the quarterly journal of the South Dakota State Historical Society.

In an article entitled “From the Capitol to Main Street: The Landscape of the Woman Suffrage Movement in South Dakota,” Elizabeth J. Almlie focuses on the courthouses, opera halls, churches, and other buildings that hosted speeches and debates on women’s right to vote in the late 1800s and early 1900s. By looking at the people and places important to the decades-long suffrage campaign, Almlie highlights how South Dakotans and national figures participated in this social movement.

“Two Posts, Two Pasts: Preserving Forts Sisseton and Totten” by Heather Mulliner examines the construction, use, and preservation of Forts Sisseton and Totten. Built in 1864 and 1867, respectively, these two posts initially served as bases of operations against the Dakota Sioux who fled from Minnesota in the aftermath of the United States-Dakota War of 1862. Fort Sisseton’s use as a hunting lodge and Fort Totten’s role as an Indian boarding school after their decommissioning influenced the level of preservation and the content of historical interpretation at the two forts.

Mulliner works as a data and policy analyst for the state Department of Social Services in Pierre and holds master’s degrees in American history from the University of Montana and in archival management and public history from New York University.