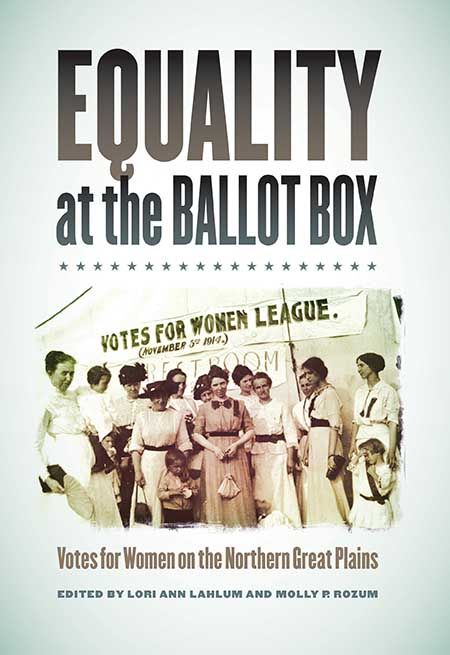 In “Equality at the Ballot Box: Votes for Women on the Northern Great Plains,” editors Lori Ann Lahlum and Molly P. Rozum have compiled a set of original essays that illuminate the woman suffrage movement and explore the untold stories of women who traveled immense distances to win over a contentious public.

“‘Equality at the Ballot Box’ is helpful for understanding the larger picture of woman suffrage, including the significance of the Woman’s Christian Temperance Union, school suffrage, and the anti-suffrage movement,” says Nancy Tystad Koupal, director of the South Dakota Historical Society Press. “This volume reveals the impact this isolated, rural region had on women’s rights nationwide.”

On Dec. 10, 1869, the governor of Wyoming Territory signed the first bill giving women full voting rights in the United States. Suffragists in the neighboring territories of Montana and Dakota believed their prospects were similarly bright. Over the next 20 years, however, organizers’ efforts to secure votes for women met only limited success. While suffragists hoped the territories’ respective bids for statehood in 1889 and 1890 would change their fortunes, only Wyoming enshrined voting rights for all in its state constitution. The fight for full woman suffrage on the Northern Great Plains would take decades.

The contributors to “Equality at the Ballot Box” build upon classic woman suffrage scholarship and develop new ideas that capture the spirit of suffrage on the Northern Great Plains. The region’s unique circumstances are considered, including significant populations of European immigrants and American Indians as well as harsh climates and sprawling landscapes. By turning scholarly attention to this area, Lahlum and Rozum start a conversation and point to rich avenues for further exploration.

Lahlum is a professor of history at Minnesota State University, Mankato, where she teaches courses on the American West, environmental history, Minnesota history, western women’s and gender history, and political history in the northern grasslands. With Betty Bergland, she edited “Norwegian American Women: Migration, Communities, and Identities.” Lahlum grew up on a farm in LaMoure County, N.D.