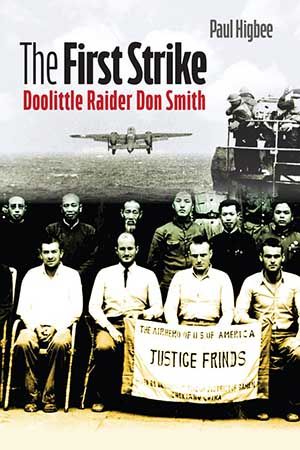 Commanding Plane Fifteen, a B-25 nicknamed the “TNT,” the 24-year-old Smith successfully led his squad to their target in Japan and, after a watery landing, to safety through Japanese-occupied territory in China. Seven months after the Doolittle Raid, Smith died in an airplane crash during a routine exercise over the English countryside. He left behind a family and a community that had, only months before, honored him while he visited home on leave.

In his short life, Smith made an indelible impression on those who served with him, but he left behind no personal recollections of his experience. Until now, his story was known only to a close few, surviving through the frequent letters he wrote home to his parents in Belle Fourche, S.D.

With “First Strike,” Higbee follows Smith from his childhood through college, flight training, and service in the United States Army Air Corps, and reveals the uncertainty of life in the Army Air Corps during World War II.

Higbee is a longtime contributor to South Dakota Magazine. He holds degrees from the University of Notre Dame and Black Hills State University, where he serves on the advisory board for the Leland D. Case Library for Western Historical Studies. With more than 40 years in public education, he is part of the United States Department of Education Teaching American History program and has worked as a writer-in-residence for the South Dakota Arts Council.

Higbee served as the lead writer for “Dakota Pathways,” South Dakota Public Broadcasting’s Emmy Award-winning history television show for children, and received a Governor’s Award for History from the State Historical Society in 2001. The author of several books on the history of the state, Higbee currently resides in the Black Hills.