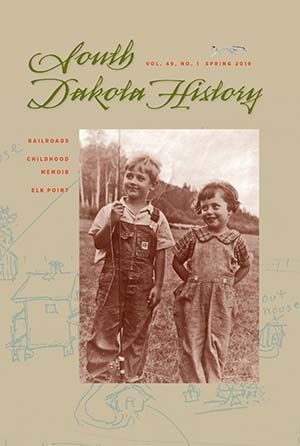 State-run railroads, a childhood memoir, and William DuPont’s connection to the town of Elk Point are highlighted in the latest issue of “South Dakota History,” the quarterly journal of the South Dakota State Historical Society.

Steven J. Bucklin focuses on Gov. William J. Janklow’s decision to have the state purchase rail lines in “Working on the Railroad: A History of the South Dakota Core Rail System.” By 1979, many of the railroad companies in South Dakota had gone bankrupt, leaving farmers unable to transport crops efficiently. Janklow supported the state’s purchasing and running of several rail lines, which restored or maintained service on vital routes.

“Adventures on False Bottom Creek, 1940–1948: One Girl’s Story” follows the childhood experiences of Margaret Foglesong Ball Lloyd as her family moved from Los Angeles, California, to a farm near St. Onge, north of the Black Hills. There, Lloyd grew up among a large extended family, attended a one-room school, and felt the impacts of World War II on the home front.

Lloyd earned her M.S. and Ph.D. from Washington State University and is a former professor of behavioral psychology. She now lives in Des Moines, Iowa.

In “Small Pond, Big Fish: Elk Point and William DuPont,” John D. Fowler reflects on the connection between the famed DuPont family and the town of Elk Point, where William DuPont moved in 1891 to take advantage of South Dakota’s lenient divorce laws. Although DuPont lived in Elk Point for only a short time, he and his second wife impacted the community in ways that continued for decades. Today, the high-school football stadium occupies the site of his former home.

Fowler received his law degree from the University of Virginia, worked for multiple law firms in New York, and currently serves on the board of trustees of the South Dakota State Historical Society.