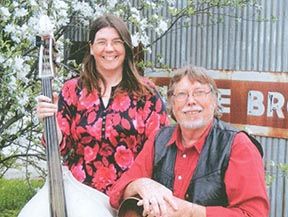 The Museum of the South Dakota State Historical Society at the Cultural Heritage Center in Pierre will host an outdoor concert called “Music of the American West” featuring traditional music artists Bob and Sheila Everhart on Friday, Aug. 16, at 7 p.m. CDT at the Capitol Lake Visitor Center in Pierre.

The museum is also hosting its annual ice cream social that evening beginning at 6:30 p.m. CDT by the visitor center, featuring several flavors from the South Dakota State University Dairy Barn. Museum staff and volunteers will serve ice cream until it’s gone. There is no fee to attend the concert or the ice cream social.

The concert features well-known songs from Western singers and artists. Attendees are encouraged to bring lawn chairs, blankets or any other comfortable outdoor gear for the evening. Restrooms will be available. In case of extreme heat or inclement weather, the event will be moved inside the visitor center.

The Everharts have recorded several albums of traditional, folk and country music, and earned a Grammy nomination for one of their Smithsonian recordings. They have appeared alongside such performers as Patti Page, Ray Price and Jimmy Buffet, earning accolades all over the world including the “Lifetime Achievement Award” from World Music Events in Austria. They have appeared on “The Today Show” and the “Louisiana Hayride.”

“This is traditionally a great family event for us,” said Jay Smith, museum director. “Bob and Sheila Everhart have performed for us before, and they are terrific entertainers who will put on a memorable show filled with classic materials and a few surprises. They are from nearby Anita, Iowa, where some of our audience may have heard their radio program or attended one of the festivals they periodically host. Bob is an accomplished author as well with five books, including his biography entitled ‘What I Saw,’ released in 2010.”