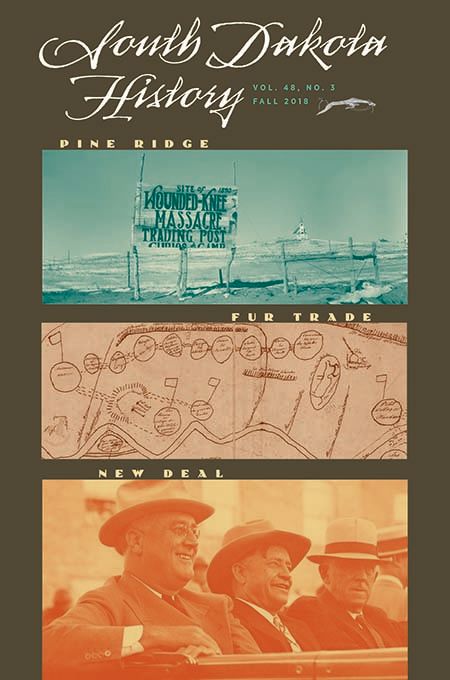 Two figures from South Dakota’s diverse history and an account of the New Deal’s impact on the state are featured in the latest issue of “South Dakota History,” the quarterly journal of the South Dakota State Historical Society.

“Reexamining Dick Wilson: Oglala Politics, Nation Building, and Local Conflict, 1972–1976” by John Truden explores the complicated legacy of Dick Wilson, who served as chair of the Oglala Sioux Tribe in the 1970s. While Wilson is most remembered for his controversial leadership during the Wounded Knee occupation of 1973, Truden emphasizes the chairman’s efforts to improve conditions on the Pine Ridge Indian Reservation. Wilson promoted education, worked to improve infrastructure and used federal funds with the goal of creating an independent Oglala nation. Truden is a doctoral student in history at the University of Oklahoma in Norman.

W. Raymond Wood examines the life of a little-known French-Canadian trader and interpreter in “Forgotten Fur Trader: Joseph Graveline and Exploration on the Upper Missouri River.” Graveline first came to historians’ attention through the journals of Meriwether Lewis and William Clark, whom he assisted during their travels through Louisiana Territory in 1804–1806. Wood focuses on Graveline’s interactions with traders, explorers, government officials and American Indians before and after the Lewis and Clark Expedition to provide a fuller picture of the fur trader and his impact on the region. Wood is a professor emeritus of anthropology at the University of Missouri, where he taught for almost four decades.

An excerpt from “A New Deal for South Dakota” by R. Alton Lee focuses on the political, economic and natural environment in South Dakota from the end of World War I to the onset of the Great Depression. In those years, South Dakotans faced economic and environmental disaster. To survive, many turned to the New Deal programs of President Franklin D. Roosevelt. Lee is professor emeritus of history at the University of South Dakota and specializes in the political history of the Northern Great Plains.