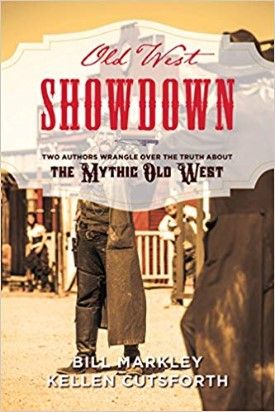 Bill Markley will shoot down myths of the American West during a program at the Cultural Heritage Center in Pierre on Tuesday, Nov. 13.

The Pierre man is the co-author of “Old West Showdown.” In the book, Markley and co-author Kellen Cutsforth examine 10 of the best-known people and events in the history of the American West.

Everyone is welcome to attend the free program, which begins at 7 p.m. CST on Tuesday, Nov. 13.

“The co-authors present the facts as agreed upon by most historians and then present opposing viewpoints. Those attending the program will enjoy the different perspectives about the same person or event,” said Catherine Forsch, president of the South Dakota Historical Society Foundation. The foundation is the nonprofit fundraising partner of the South Dakota State Historical Society. It sponsors the program as part of the History and Heritage Book Club.

Markley said that the idea for “Old West Showdown” came about when he and a friend got into an argument about Wyoming homesteader Ellen Watson, known in history as “Cattle Kate.” Watson was lynched by agents of powerful cattle ranchers. The friend said that “Cattle Kate” had traded sexual favors for cattle. Markley replied that the reason “Cattle Kate” was lynched was that big ranchers wanted access to the water on her homestead. The two argued back and forth and then came up with the idea for having a book arguing both sides of some of the top controversial western history topics.

Markley and Cutsforth chose 10 topics they believe are of interest to many. Each of the book’s chapters is a different topic. Each chapter lays out the facts about that event or person as agreed upon by most historians. The co-authors then present opposing points of view.

Markley is a member of Western Writers of America. His writing has appeared in True West, Wild West and South Dakota Magazine. He is the author of “Deadwood Dead Men,” “Dakota Epic: Experiences of a Reenactor during the Filming of Dances With Wolves,” “Up the Missouri River with Lewis and Clark” and other books.

“Old West Showdown” is available at the Heritage Stores at the Cultural Heritage Center and the Capitol.