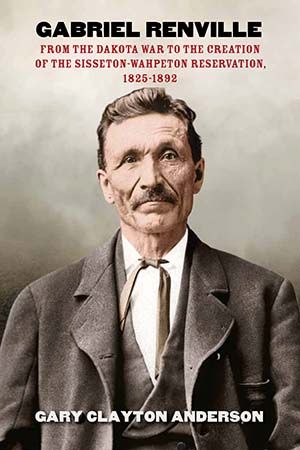 Two events this week celebrate the release of the latest book from the South Dakota State Historical Society. Gary Clayton Anderson, author of “Gabriel Renville: From the Dakota War to the Creation of the Sisseton-Wahpeton Reservation, 1825–1892,” will be a featured speaker at the South Dakota Festival of Books, Sept. 20-23, in Brookings. Anderson will also speak at the Sisseton Wahpeton Oyate Tribal Headquarters, in Agency Village near Sisseton on Sunday, Sept. 23, from 2-3:30pm.

Gabriel Renville (1825–1892) was born on the shores of Big Stone Lake in what is now South Dakota. He opposed conflict with the United States during the Dakota War of 1862 and went on to work tirelessly to create and maintain a space for his people. Renville is credited with the creation of the Lake Traverse Indian Reservation in 1867.

“It is the anomalies that characterized his life that make him so fascinating,” Anderson says. “A man of mixed ancestry, he seemed to some a traitor to his Dakota people when he opposed fighting the whites in 1862. Yet, after the war, he worked diligently to reacquire land and standing for his people.”

In this first-ever biography of Renville, Anderson illuminates the life and motivations of an important Sisseton-Wahpeton chief who was a man of many contrasts. Of European and Dakota descent, Renville adopted Christianity yet refused to abandon the Dakota Medicine Society. He held fast to kinship obligations even as he courted capitalism. He won favor among white missionaries and Indian agents for promoting their ideas about hard work even as he frustrated them with his love of dancing and feasting. He clung to traditional lifeways while also committing to the economic progress that made the Sisseton-Wahpeton reservation a prime example of what the Bureau of Indian Affairs called its “Civilization Program.”

In the end, whether scouting under Gen. Henry Sibley or serving as head chief of his people, Renville remained committed to traditional Dakota ethics even as he embraced the change he and others believed was needed to survive in the coming 20th century.

Anderson is the George Lynn Cross Research Professor of History at the University of Oklahoma at Norman. He specializes in the history of American Indians of the Great Plains and American Southwest and has written numerous articles and books on the subject.