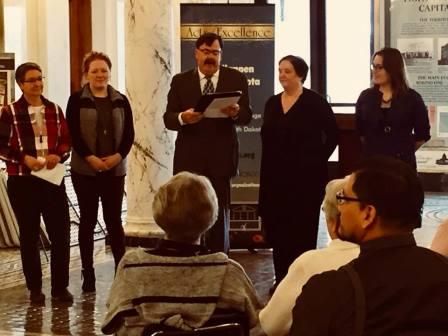 During a ceremony on Thursday, Jan. 18, in the Capitol Rotunda in Pierre, Lt. Gov. Matt Michels and South Dakota Hall of Fame Chair Randy Houdek credited the press with working to preserve and promote South Dakota’s history and heritage since its founding in 1997. The press was nominated for the Act of Excellence by Terry Woster, a former reporter and columnist with the Associated Press, Sioux Falls Argus Leader and Pierre Capital Journal.

“This recognition by the South Dakota Hall of Fame shows the importance of our mission,” says Nancy Tystad Koupal, press director. “The South Dakota Historical Society Press works to publish books that educate people about our state and region’s rich history. It is wonderful to have the acknowledgement that we are achieving our goals.”

The South Dakota Hall of Fame aims to champion a culture of excellence in South Dakota, one act at a time. Additional information about the Act of Excellence and past awardees can be found online at sdexcellence.org.

View the South Dakota Historical Society Press catalog at sdhspress.com and follow its activities on Facebook and Twitter (@SDHSPress). To place a book order, call 605-773-6009 or email orders@sdhspress.com.