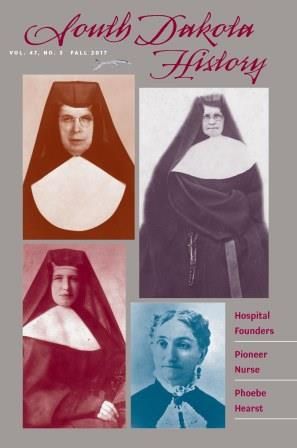 Hospital founders, philanthropists and a pioneer nurse are featured in the Fall 2017 issue of “South Dakota History,” the quarterly journal of the South Dakota State Historical Society.

“Three Catholics and a Congregationalist: Four Women and the Founding of a Medical Industry in South Dakota” examines the creation of the multi-million-dollar Avera McKennan medical system. The roots of the industry began when several Presentation Sisters traveled from Ireland in 1880 to assist Bishop Martin Marty in establishing mission schools in Dakota Territory. The order eventually expanded its role to operate a hospital, funded by Sioux Falls benefactor Helen Gale McKennan in 1906, as well as other facilities across the northern plains. Author Margaret Preston is a history professor at Augustana University.

“Pioneer Nurse Jean Todd: A Woman Professional on Dakota Frontier” by Ruth Page Jones is an account of a Scottish immigrant and single mother who became one of the first trained nursing professionals in South Dakota. From her arrival in the Mitchell/Plankinton area in 1887, Todd overcame challenges such as poor transportation and opposition from local doctors to serve the community until retiring in 1918. Jones is a researcher currently focusing on South Dakota women’s history.

The life and legacy of Phoebe Hearst is explored in “Philanthropy as Cultural Outreach: Phoebe Hearst and Music in Lead, South Dakota” by Leta E. Miller. Hearst, the mother of newspaper mogul William Randolph Hearst, inherited the family fortune after the death of her husband George in 1891. This wealth included stock in the Homestake Mine in Lead, S.D., where she became a major community benefactor. Hearst enriched the lives of area citizens through the development of cultural and musical activities, including world-class concerts at the Hearst Free Library and Homestake Opera House and Recreation Center. Miller is a professor of music emerita at the University of California and author of numerous works on 20th-century American music.