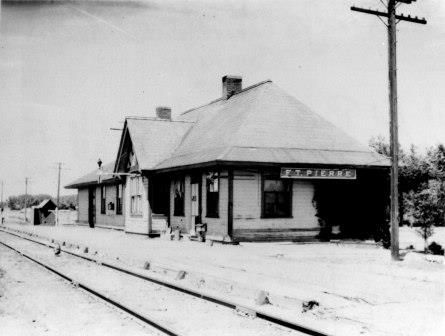 People can learn about the history of railroads and one historic depot in South Dakota during a program that will begin at 7 p.m. CDT on Tuesday, April 11, in the 1906 Fort Pierre Depot Museum.

“Railroads played an important role in the history of South Dakota. Railroads brought immigrants into Dakota Territory. Many towns sprang up along railroad tracks, and some towns died when the railroad passed them by,” said Michael Lewis, president of the South Dakota Historical Society Foundation. “The railroad depot handled passengers and freight. A depot that has been restored and now is a museum is the perfect place to have a program about railroads, enabling people to see what a depot was like.”

The foundation is the nonprofit fundraising partner of the South Dakota State Historical Society and is sponsoring the program with the cooperation of the Verendrye Museum in Fort Pierre. Everyone is welcome to attend the free program, made possible by a grant from the South Dakota Humanities Council, an affiliate of the National Endowment for the Humanities.

Rick Mills will present the program “Yesterday and Today – Railroading in the Land of Infinite Variety.” He is a fifth generation resident of western South Dakota and a lifelong railroad enthusiast. He has been director of the South Dakota State Railroad Museum in Hill City since the museum opened in 2010.

Mills has authored or co-authored books about railroad history and has been involved with programming for South Dakota Public Broadcasting, the History Channel and the Discovery Channel. Mills’ PowerPoint program on April 11 will feature images from some of his previous books on railroading, images from the museum’s collections, and previously unpublished images which will be used in the museum’s new book on state railroads, scheduled for publication in late 2017.

The book “South Dakota Railroads” by Mike Wiese and Tom Hayes will be available to purchase at the program. The book contains postcards and images of depots, trains and wrecks that defined South Dakota railroading in the early 20th century.

Editor’s Note: The attached photo shows the Fort Pierre Depot as it appeared before it was moved out of town in 1963. (Photo courtesy South Dakota State Historical Society-Archives)