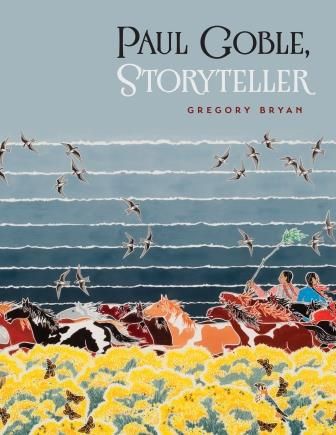 PIERRE, S.D.—The first-ever biography of internationally known children’s author and illustrator Paul Goble, who passed away on Jan. 5, has been released by the South Dakota State Historical Society. Written by Gregory Bryan, “Paul Goble, Storyteller” captures a life that few Americans are familiar with.

In writing “Paul Goble, Storyteller,” Bryan interviewed Goble, his family, friends and those whose work he influenced to tell the artist’s story, including Lakota artist and author S.D. Nelson. As Bryan records, Nelson acquired the courage to begin illustrating and writing his own stories after reading Goble’s “The Girl Who Loved Wild Horses,” which won the prestigious Caldecott Medal in 1979.

Goble was born in England, but his fascination with Plains Indian cultures prompted him to move to the Black Hills of South Dakota, where he had lived and worked for the past 40 years. In an interview with the Rapid City Journal, Goble’s son Robert stated, “The last smile that ever passed Papa’s face was seeing the first copy of his biography. He considered it the jewel in his crown; the thing that made his career complete.”

“Bryan delivers an insightful, behind-the-scenes look at Goble throughout his life,” says Nancy Tystad Koupal, director of the South Dakota Historical Society Press. “He starts with Goble’s childhood in wartime England and shows how the young man’s study of American Indian cultures led to a career in illustration and writing.”

“Paul Goble, Storyteller” is also richly illustrated with the artist’s works and features stories about his creative process in writing, designing and illustrating his bestselling books. Goble’s artwork is located in collections and institutions throughout the country, including the Library of Congress and the South Dakota Art Museum. Goble wrote and illustrated more than 40 books for children.

Bryan is a professor of education at the University of Manitoba, specializing in literacy education and children’s literature. Born and raised in Australia, Bryan lives in Winnipeg with his wife and their two children.

“Paul Goble, Storyteller” can be ordered for $29.95, plus shipping and tax, directly from the South Dakota Historical Society Press. Visit sdhspress.com or call (605) 773-6009. The book is also available through most bookstores and online retailers. For publicity information or to schedule an interview or event with the author, contact Jennifer.mcintyre@state.sd.us.