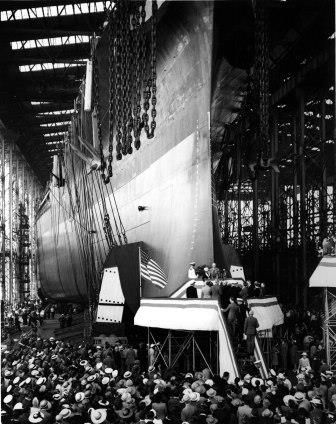 The two discs were recently sent to the Northeast Document Conservation Center in Andover, Mass. The conservation center used its touchless optical scanning technology, called IRENE, to retrieve the sound from the two discs.

After a brief delay, the South Dakota traveled down the ways into the Delaware River. As proclaimed by radio announcer Lewis Fischer, “There she goes … Mrs. Bushfield has just smashed the christening bottle and majestically the South Dakota is going down the ways. You can hear the crowd yelling, the flags are flying and the whistles blowing. It is a magnificent sight.”

The Sioux Falls Washington High School band performed at the event and played “Anchors Aweigh” as the ship drifted into the Delaware River. The band played the national anthem later in the ceremony.

The main speaker for the event was U.S. Secretary of War Frank Knox. He said, “There are fewer stirring views, nor moving sites, than that which you just witnessed. To see a great battleship leave the spot on the land and take to her native element. And to know that great ship will make a tremendous contribution to the safety of our country and all the people in it is a moving thought.”

Secretary Knox emphasized that day on June 7, 1941, exactly six months before the Japanese attack on Pearl Harbor, the necessity of preparing the military for the future, saying “We must, if we are to play our part in the world of the future, establish and maintain the greatest sea power the world has ever seen and along with that predominant sea power, and auxiliary service, civil supplemented and make it all powerful everywhere.”

He continued, “Unhappily we seem to be living in a time, when affairs are moved by force, when destinies are controlled by force and since we know now that at this time in the world, which for some time in the future we must live. Then we Americans must have that force, which is first essential to protect us in our security and safety and finally to support those elements and those ideals in humanity and civilization that will bring finally peace to this war in the world.”

Knox concluded, “On your behalf I say, to the good ship South Dakota, God go with you, because after all, your mission, the mission for which we built you, is not war, but the prevention of war as God wills. Thank you.”

A recording of the ceremony was made by radio station WCAU of Philadelphia. The recording was sent via airmail to WNAX in Yankton, which broadcast the ceremonies. Arthur J. Smith, program director of WNAX, presented the transcription discs to Governor and Mrs. Bushfield, who then transferred them to the South Dakota State Historical Society.

The 17th Virginia Class nuclear submarine, the USS SOUTH DAKOTA (SSN 790), will be christened in the summer of 2017. The submarine is scheduled to join the fleet in August 2018.
The SSN 790 will be the third boat commissioned with the name “South Dakota.” The first was the Armored Cruiser USS South Dakota (ACR-9). The second was the Battleship South Dakota (BB-57), one of the most decorated battleships in World War II.