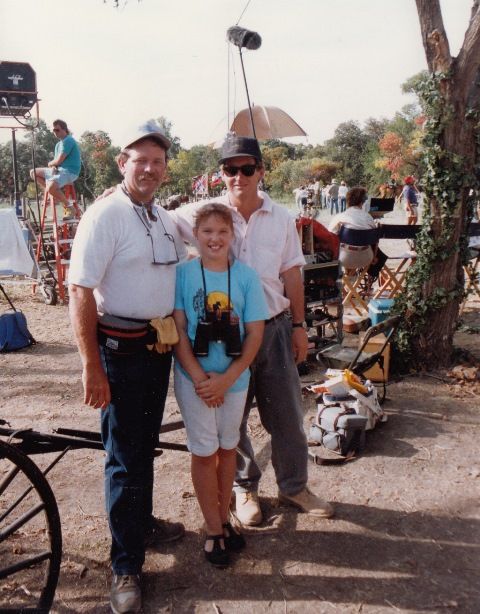 Bill Stevens of Pierre, left, who was a production assistant and van driver during the filming of “Dances With Wolves,” and his daughter Melissa visit with co-producer Jim Wilson on the Civil War set east of Pierre in July 1989. (Photo courtesy of Bill Stevens)

Events are being planned for Pierre the weekend of July 18-20 to commemorate the 25th anniversary of the first three days of filming of the Academy Award-winning movie “Dances With Wolves” in the area.

Nearly 100 Pierre, Fort Pierre and central South Dakota residents were directly involved in the making of the movie.

Bill Stevens of Pierre, who was a production assistant and van driver during the filming and is production coordinator of the planning committee, said the free weekend will be an opportunity for those involved with the movie to come together and share their experiences.

“We have a wide variety of experiences represented with our speakers,” Stevens said. “Everyone who is interested is invited to attend any or all of these sessions.”

Jay D. Vogt, director of the South Dakota State Historical Society at the Cultural Heritage Center in Pierre and a member of the planning committee, noted the historical significance of the movie.

“The commemoration of past events, such as the ‘Dances With Wolves’ 25th anniversary of filming the movie, provides us with the opportunity to reflect and gather the history of the event,” Vogt said. “The South Dakota State Historical Society is careful about what we collect for the archives and museum, and these types of events can bring to our attention new information and material on a particularly significant event.

“Twenty-five years ago, South Dakota was celebrating its 100th anniversary and the State Historical Society was moving into the new Cultural Heritage Center, and at the same time an Academy Award winning movie was being filmed in central and western South Dakota,” Vogt added. “‘Dances With Wolves’ brought new attention to our state, and we benefited from a better understanding of our history and a draw of tourists to South Dakota.”

The free event, at the Best Western Ramkota Hotel, kicks off Friday at 7 p.m. CDT:
• Welcome from Ramkota General Manager Rick Murray, who also held that position 25 years ago when much of the cast stayed at the hotel;
• Steve Nelson, who worked for the state Department of Tourism at the time and assisted Costner and Co-Producer Jim Wilson with site locations in central and western South Dakota; and
• Stevens, who also videotaped much of the production, will then show and discuss much of his behind-the-scenes footage.

Saturday’s tentative list of speakers, beginning at 9 a.m., includes:
• Tony Mangan, also on the planning committee, then working for the Capital Journal, who will discuss press coverage of the filming;
• Monte and Jay Curry, father and son who worked on set construction and in the art department;
• Pearl Stone, a committee member who was an on-camera American Indian villager throughout the film and who also assisted casting directors with on-camera Lakota extras;
• Dave Hansen, who worked on the locations crew at Houck Buffalo Ranch and also assisted with construction;
• Jim and Jenny Wegner, siblings whose business, Wegner Auto, provided vehicles for the cast and crew;
• Bill Markley, a committee member and Civil War re-enactor who appeared in several scenes in central and western South Dakota as both a federal and confederate soldier; and
• Jeff Mammenga, a committee member and Civil War extra whose scenes were cut from the theatrical version.

Saturday evening will end with any other members of the public being able to share their experiences.

The weekend will conclude with a Sunday morning trip to near the Houck Buffalo Ranch southwest of Fort Pierre, where much of the film was shot, to see buffalo and horses.

A similar event may be held in Rapid City this fall, giving Black Hills-area people a chance to share their memories.