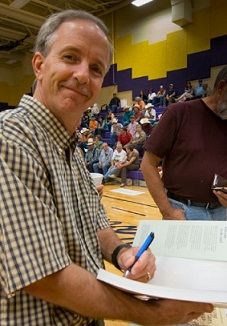 From the driveway of his home near Custer, Horsted could see a rock formation photographed by William Inningworth, the photographer who accompanied Gen. George Armstrong Custer’s 1874 expedition to the Black Hills.

Horsted was a newspaper photographer and chief photographer for the South Dakota Department of Tourism before striking out on his own as a freelance photographer.

He decided to stand in the footsteps of Inningworth and photograph the same rock formation.

“That connection to history drew me in, the notion that I could stand in the same spot, create a new image with the same perspective, and then compare past and present,” Horsted said.

The original Illingworth photograph glass plates are part of the South Dakota State Historical Society collection at the Cultural Heritage Center in Pierre.

Horsted, his co-authors and his wife, Camille Riner, have created four books which combine historic images and current photographs taken by Horsted at the same location, accompanied by information about the site.

Horsted will discuss his books and photography as the guest speaker at this month’s History and Heritage Book Club meeting. The free program will begin at 5:15 p.m. Central Time on Thursday, March 21, at the Cultural Heritage Center. Everyone is welcome to attend.

“Paul’s books give the sense of being able to look at scenes as they were decades ago and see the same features in current photographs taken by Paul,” said Michael Lewis, president of the South Dakota Historical Society Foundation. The foundation is the nonprofit fundraising partner of the SDSHS. The foundation and the SDSHS Press co-sponsor the History and Heritage Book Club.

For Yellowstone Yesterday & Today, Horsted worked with Bob Berry of Cody, Wyo., who has a large photo collection and knowledge of Yellowstone National Park.

“I was curious if the same natural processes would be seen there as I’ve observed in the Black Hills. In the Hills the rule generally is that there are many more trees and a denser forest than in pre-1900 photographs. Also I found several locations where the same dead tree or same live tree, now grown to maturity, could be observed in past and present. This really fascinated me and I was watching for the same thing in Yellowstone,” Horsted said. “We specifically chose more than 100 images which we felt best represented the spectrum of the park’s features but were also places that are generally accessible to visitors today.”

Horsted said that the challenges in doing “re-photography” are finding and getting to the site, which can take from minutes to a year or longer; and accurately positioning the camera so that even foreground elements of the historic image are accurately portrayed in the modern image.

“This is harder than it sounds. It’s sometimes difficult to ‘see’ or perceive correctly from the historic image just what you are looking at in today’s world. When it all comes together, it’s a wonderful experience,” Horsted said. “Going to the actual site of these historic images makes me feel I’m ‘standing in history.’”

Horsted’s books are available at the Heritage Stores at the Cultural Heritage Center and Capitol, plus Horsted will be selling books at the event.