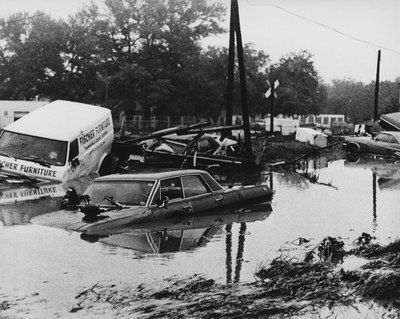 PIERRE, S.D. – On June 9, 1972, Rapid City citizens and other Black Hills residents experienced a devastating flood that took 238 lives, destroyed 720 homes, severely damaged 1,400 dwellings and resulted in more than half a billion dollars’ worth of damage.

In remembering the event, the archives staff of the South Dakota State Historical Society created a website with links to photographs, a reminiscence and a 10th anniversary program through the South Dakota Digital Archives.

“The Rapid City flood of 1972 is one of the most tragic events in our state’s history,” said Jay D. Vogt, director of the SDSHS. “It’s our job to keep records of such events and make them available to the public, and the South Dakota Digital Archives is a way of doing that.”

The link includes various images taken after the flood, a reminiscence by then-Mayor Don Barnett, and a 10th Anniversary Program from 1982, including a list of those who perished in the flood.

Visit the State Historical Society-Archives website at history.sd.gov/Archives and find the link to “1972 Flood.”

In recognition of the 40th anniversary of the Rapid City flood, the South Dakota State Historical Society Press last year published Come into the Water: A Survivor’s Story written by Merlyn Janet Wagner. The book is available by contacting the Press at 605-773-6009 or www.sdshspress.com.