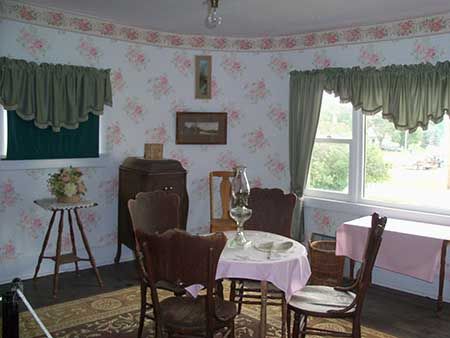 A crusader found refuge in the “Pink Castle.”

Susan B. Anthony, a national leader in the woman suffrage movement, found a place to stay and probably friendship when she stayed at the home of John and Alice Pickler in Faulkton in 1890. Anthony was crisscrossing South Dakota in 1889 and 1890 to campaign for women being able to vote.

The Picklers were advocates of women’s rights. Major Pickler, a Civil War veteran, came to Faulk County in 1882 and established a law practice and land development business. He was elected to the Dakota Territorial Legislature in 1884, and after the Dakotas were granted statehood, was elected to the U.S. House of Representatives and served there until 1897. Alice was a leader in the Women’s Relief Corps of the Grand Army of the Republic, Women’s Christian Temperance Union and the South Dakota Equal Suffrage Association.

When South Dakota became a state in 1889, its constitution required that the first legislature submit a constitutional amendment that would give every qualified person the right to vote. This extended the right to vote to most women. The election was to take place on Nov. 4, 1890.
The Picklers traveled to Washington, D.C., in February 1890 to attend a banquet given in honor of Anthony turning 70 years old on Feb. 15 and to attend the National American Woman Suffrage Association Convention.

The status of woman suffrage in South Dakota was discussed at the convention, and Anthony announced the members of a finance committee to work in South Dakota.
Both Picklers spoke briefly at the convention. As reported in the Washington, D.C. Evening Star, Alice said that “one of the facts most regretted in her new state was that the university and agricultural college, in both of which women had equal rights with men, were governed entirely by men.” Women should have a hand in the management of public institutions, she concluded.

John thanked those attending for their interest in woman suffrage in South Dakota and delivered a few arguments in favor of women suffrage.
According to Pickler family lore that was told to Faulkton resident Jody Moritz, Anthony stayed with the Picklers for four days resting and speaking in the fall of 1890. The Pickler home wasn’t just a home; it was a 20-room, three-story Victorian mansion that was the center of social life for the community. The house was painted a color between salmon and coral, giving the mansion the nickname “The Pink Castle.”

A copy of a poster in the Pickler Mansion states that Anthony spoke at the courthouse in Leola on Sept. 20, 1890. According to letters from Anthony, she and other leaders in the suffrage movement spoke at Leola and other communities in north central South Dakota in September and October 1890. According to the family, Anthony returned to Faulkton after this tour and rested two days, then went to the Black Hills for two weeks of campaigning for woman suffrage.
She returned to Faulkton and stayed another two nights before going to her brother’s home in Kansas.

She reportedly found the rose wallpaper in the room in which she stayed restful.

Despite the efforts of Anthony and other national and state speakers, the amendment for woman suffrage in South Dakota was defeated 45,632 to 22,972 in the November 1890 election.

In a letter dated Feb. 27, 1901, Anthony addresses Alice Pickler as “My dear friend” and congratulates Alice Pickler on being elected president of the South Dakota Equal Suffrage Association. “I hope that you will stick to the helm of the ship come what may. We want the right woman in the right place when the next submission comes and you are that woman in my opinion,” stated the typed note.

Anthony inquired after Mr. Pickler and the four Pickler children, and requested that Alice Pickler write “and tell me all about yourself and about South Dakota, and what are the chances for getting enfranchisement there.”

Anthony added a handwritten note stating, “I see Pierce has died. He cheated us out of suffrage for women in both the Dakotas.”

Anthony was referring to Gilbert A. Pierce, who died on Feb. 25, 1901. Pierce served as governor of Dakota Territory from 1884-1887. As a territorial legislator, John Pickler had  promoted a bill for woman suffrage which passed both houses of the legislature. It was vetoed by Pierce.

Anthony wrote several more letters to Alice Pickler, which are contained in the Pickler papers at the South Dakota State Historical Society – State Archives, located at the Cultural Heritage Center in Pierre.

Anthony returned to Faulkton, probably in 1896, and again stayed with the Picklers, according to Pickler family lore.

Anthony died in 1906 and John Pickler in 1910, both without seeing women granted the right to vote. Alice Pickler, however, did live to make her voice heard at the ballot box before her death in 1932. The 19th Amendment to the U.S Constitution was ratified and took effect in 1920, giving most women throughout the country the right to vote. Alice was secretary of the South Dakota Equal Suffrage Association at the time of her death.

The Pickler Mansion still stands in Faulkton. Visitors can tour the mansion in the summer and see the room which Anthony found so restful, now called the Susan B. room, and learn about the history of three people who played roles in the suffragist movement.