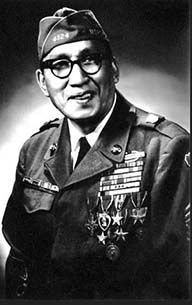 Woodrow “Woody” Wilson Keeble was a warrior who wore a U.S. Army uniform.

Almost six decades after gallant actions in the Korean War and 26 years after his death, the U.S. Army master sergeant received the Congressional Medal of Honor. Keeble was a member of the Sisseton Wahpeton Oyate and the first Dakota to receive the Medal of Honor, the highest military honor in the United States for valor in combat.

Keeble was born in Waubay on May 16, 1917. He attended what is now Circle of Nations boarding school at Wahpeton, N.D., and joined the North Dakota Army National Guard. His Guard unit was activated during World War II and he served in I Company of the North Dakota 164th Infantry Regiment. The 164th Infantry fought in the Pacific, most notably at Guadalcanal. Keeble developed a reputation for bravery and skill.

After the war, Keeble returned to Wahpeton, married and worked at the school he attended while growing up.

In 1951, Keeble returned to active duty when the 164th Infantry Regiment was reactivated for the Korean War. For his actions on Oct. 20, 1951, Keeble became a legend.

According to the U.S. Department of Defense, Keeble’s platoon met up with two platoons pinned down by enemy fire coming from three bunkers or pillboxes in a V-formation on a hill. The officers or platoon leaders were wounded or killed in action, so Keeble assumed command of the company. Keeble’s plan was to lead one platoon at a time up the hill to try to destroy the enemy. After the third failed attempt, Keeble decided to go up the hill alone.

But first, he had to eliminate soldiers in trenches in front of the bunkers. He did this and then took out a bunker with a grenade. He moved to the second bunker and destroyed it with another grenade.

The final bunker was at the top of the hill. Keeble lobbed a grenade through the back entrance. The enemy was eliminated.

Allied forces then advanced and secured the hill.

Keeble’s assault on the enemy took two to four hours under heavy fire. He was wounded multiple times with injuries to his chest, both arms and both legs.

After the war, Keeble returned to North Dakota. One lung was removed because of tuberculosis. This triggered a series of strokes that left him partially paralyzed and unable to speak. His wife died but he later remarried.

Keeble received many awards for his military service in World War II and Korea, including the Army’s second highest award, the Distinguished Service Cross.

Over the years, friends and family tried unsuccessfully to have Keeble awarded the Medal of Honor. Recommendations that Keeble receive the Medal of Honor were submitted twice, but each time, the paperwork was lost.

The fight to have him receive the Medal of Honor lived on.

When it was determined that the recommendations had never arrived at headquarters, family and friends gathered recommendations from those who had fought with Keeble. U.S. Sens. John Thune and Tim Johnson of South Dakota and Byron Dorgan and Kent Conrad of North Dakota urged that Keeble be posthumously awarded the Medal of Honor.

In 2007, the Department of Defense notified the four senators that a statute of limitations would prevent the Medal of Honor from being granted -- there was a three-year-window from when the action took place to when the medal could be awarded.

The senators drafted legislation that would grant a waiver of the statute of limitations. This language was included in the funding bill for Iraq that was passed by Congress.

President George W. Bush awarded the medal on March 3, 2008. He said while the tribute came too late for Keeble to see the honor bestowed, his story can still be told and his memory honored.

A Hall of Honor display honoring Keeble and eight other Medal of Honor recipients from South Dakota is located on the first floor of the west wing of the South Dakota Capitol, near the north entrance. Numerous regional sites also pay homage to Keeble’s memory.