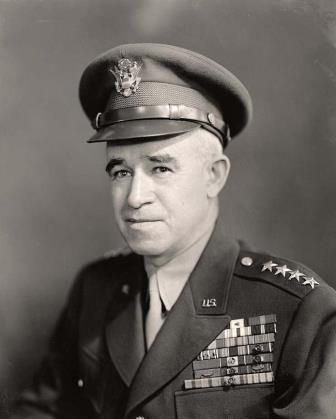 South Dakota State College’s (now South Dakota State University) 1921 yearbook, the Jack Rabbit, states, “We can truthfully say that this has been one of the most successful years for the military department in the history of the college … The interest the men take and the splendid work the military department is doing are due to the efforts of Major Omar N. Bradley, our commandant. Major Bradley has served in the 14th Infantry since 1915, spending over a year in active service on the border (U.S.-Mexican). He is a graduate of West Point and has taken over the work as a West Point man would.

“Not only has he organized the battalion and brought the drill to cover a larger scope of military tactics than ever before, but he has spent more time and energy in promoting the physical welfare of the students. This he has done by organizing classes in boxing and wrestling. He has also taken an active part in coaching athletics and has won a place in the esteem of every State student.”

Bradley had joined the SDSC faculty in the fall of 1919. He had applied for a position as a military instructor at a college with a Reserve Officer Training Corps unit, wanting to teach in Washington or Oregon. The choice he indicated for geographic area, “Northwest,” denoted North Dakota and South Dakota, not the Pacific Northwest.

“As a result of this misunderstanding, on August 25, I was assigned to be assistant professor of military science and tactics at the South Dakota State College (of Agriculture and Mechanic Arts) in Brookings,” Bradley wrote in his autobiography, “A General’s Life.”

“Our year at Brookings was a bitterly cold one, but the work turned out to be interesting and challenging.”

After a summer at an ROTC encampment in Michigan and camping in Minnesota, Bradley and his wife, Mary, returned to Bookings in late August of 1920 prepared for another school year.

“I was soon astonished to receive a telegram ordering me to duty at West Point ‘without delay,’ as an instructor in the math department,” Bradley wrote in his autobiography.

Bradley was described as a tall man, at just over 6 feet, lanky, quiet, self-confident, a tough fighter and a brilliant military tactician.

During World War II, Bradley was involved in every crucial decision that determined the outcome of the war in Europe from 1943 on. He was known as “The Soldier’s General” by his troops because of his concern for the men he led.

Though Bradley’s time in South Dakota was short, he seemed to enjoy it. An article in the Brookings Register the day after the general’s death stated that Bradley became chairman of the board at Bulova. At the time of the article’s publication in 1981, Bulova watches were distributed to the outstanding ROTC graduate at SDSU, and outstanding members of the freshman, sophomore and junior classes received autographed copies of Bradley’s autobiography.

A representative of Bulova said that when asked about Brookings, “He (Bradley) spoke at great length of many things, the fact that Brookings, at that time, had no paved streets, the football team he helped to coach, the boxing team that was formulated the same year, the wonderful hunting, the fine people he met, as well as the great group of reserve officers he commanded. “

Bradley returned to Brookings at least once, in 1946, to hunt, according to the Register.

“There is no standard against which to compare Bradley as an army group commander. During the fighting in Europe, his calm and effective presence was important in times of crisis, as was his deft touch in handling subordinates,” stated an online article courtesy of the United States Army Center for Military History.