Sept 2014 - A Constitution for the New State of South Dakota 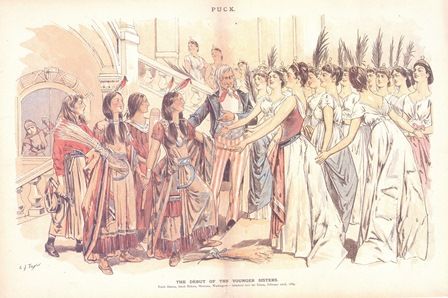 A constitutional convention that resulted in what would eventually become a constitution for the new state of South Dakota might have ended before its work began.

On Sept. 8, 1885, delegates gathered in Sioux Falls to draft a frame of government.

“At the start (Henry) Neill of Grant (County) offered a resolution setting forth that lacking a mandate of the people, and acting only on the authority of the Territorial Legislature, which had arbitrarily divided the territory into two states when the whole territory should be admitted as one state, that the convention adjourn at once sine die,” wrote convention delegate L.W. Lansing in a undated document contained in the South Dakota State Historical Society – State Archives at the Cultural Heritage Center in Pierre.
Adjournment sine die means “without assigning a day for a further meeting or hearing.” To adjourn an assembly sine die is to adjourn it for an indefinite period. No date has been appointed for meeting or assembling again.

The resolution was defeated 59-12, as some delegates had not yet arrived, Lansing wrote. The convention proceeded on.

“The writer holds to the opinion that the Constitutional Convention of 1885, and of which he is the sole surviving member, evolved the instrument that became the organic law of the embryonic state,” wrote Lansing, who represented Hand County at the convention. He was a graduate of Rochester University in New York and a former assistant city editor of the Morning Herald of Rochester.

The constitutional convention of 1885 was the second time delegates had gathered to draft a constitution. A constitution is commonly defined as the body of fundamental law for a political unit. A state constitution outlines the basic structures and power of state and local government.

Discussion about statehood is said to have originated among dinner guests on Thanksgiving Day, 1879, at the home of Congregational minister Stewart Sheldon in Yankton, Dakota Territory. Delegates gathered in September 1883 for an unauthorized first constitutional convention at which they drafted a state constitution and declared statehood for the southern half of Dakota Territory. Voters supported the plan, but the Democratic-controlled U.S. House of Representatives rejected it, fearing that the new state would send Republican congressmen to Washington, D.C.

“The discussions were active and interesting and participated in quite generally,” Lansing wrote about the 1885 constitutional convention. “One delegate suggested that the Indian name ‘Dacotah’ be adopted as name for the new state but lost. A state motto was adopted ‘Under God the people rule.’ Controversial matters like Woman Suffrage, Prohibition and Minority Representation and Referendum were left to the voters and the new legislature to decide, although women were given a vote on school matters … Aliens who had declared their intention to become citizens (which they had to do to file on land) were also given the right to vote.”

The constitution that was drawn up prohibited legalized divorces, lotteries, games of chance, changing county seats or individual names, according to Lansing.

“The rank and file of the membership were honest, intelligent, conscientious men with the best interests of the new state at heart and did a good, substantial piece of work in formulating the constitution submitted for the people’s endorsement,” Lansing wrote.

Voters in the south half of Dakota Territory approved the new state constitution. The Democratic-controlled U.S. House of Representatives again rejected it.

The political tide changed after the presidential election of 1888. Republican Benjamin Harrison, who was pro-statehood, was elected president. Republican success in the election, a change by their leaders in Congress and the lame-duck Democrats wanting to get credit for allowing new states combined to assure passage of an enabling act. On Feb. 22, 1889, President Cleveland signed the Omnibus Bill allowing the creation of the states of North Dakota, South Dakota, Montana and Washington.

The Enabling Act of 1889 required a new constitutional convention for South Dakota. It was left to voters to decide whether to draft a new constitution or to adopt the constitution drawn up in 1885. Voters made their decision in an election that took place in May 1889.

“The people almost unanimously ratified the Constitution of 1885 and the (constitutional) convention that met on July 4th had only had only perfunctory duties to perform in making the Constitution conform to the provisions of the enabling act and in equitably dividing the debts and effects of Dakota Territory between North and South Dakota,” State Historian Doane Robinson wrote in “Doane Robinson’s Encyclopedia of South Dakota.”

The constitution recognized only four functions of state government, according to Robinson. These functions were to preserve the peace, administer justice, promote education and provide care for the disabled. South Dakota’s constitution is displayed in the museum of the South Dakota State Historical Society at the Cultural Heritage Center.

An election took place on Oct. 1, 1889, in which a slate of state officials was elected and the constitution approved. President Harrison signed the document that made South Dakota a state on Nov. 2, 1889.
This moment in South Dakota history is provided by the South Dakota Historical Society Foundation, the nonprofit fundraising partner of the South Dakota State Historical Society, headquartered at the Cultural Heritage Center in Pierre. Find us on the web at www.sdhsf.org. Contact us at info@sdhsf.org to submit a story idea.