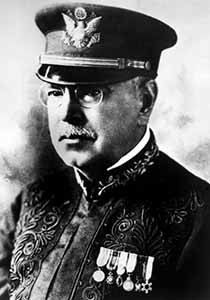 The “rock star” of his era was coming to Mitchell.

John Philip Sousa and his band were scheduled to play at the Corn Palace from Monday, Sept. 26, to Saturday, Oct. 1, 1904, as part of a community festival.

“The advance man questioned whether that sparsely populated part of South Dakota could support a week’s worth of concerts, but decided to risk the booking. Corn Palace officials paid cash in full, and the stop turned out to be a lucrative engagement,” wrote Paul Edmund Bierley in “The Incredible Band of John Philip Sousa.”

Sousa had established himself as one of America’s foremost composers and band leaders by the time he and his band played at the Corn Palace. Among his best-known marches are “The Stars and Stripes Forever,” “Semper Fidelis” and “The Washington Post.” As leader of the United States Marine Band, he shaped the musicians into the country’s premier military band. Sousa formed his own band, known as Sousa’s Concert Band or Sousa’s Band, in 1892. He and the band had toured the United States every year since then. In addition, Sousa and the band had made two tours of Europe and one tour around the world by 1904.

“Promptly at 4:25 o’clock this afternoon John Philip Sousa and his incomparable band and the Misses Estelle Liebling and Jessie Straus, the soprano and violin soloists, arrived in the city on a special train via the Milwaukee road,” reported the Michell Daily Republican on Monday, Sept. 26, 1904. “As the train pulled into the station the Michell band played one of Sousa’s most famous marches, ‘Invincible Eagles.’ When Mr. Sousa stepped from the platform of the sleeper, he was given a rousing cheer and he lifted his cap.”

The Corn Palace that Monday evening was crowded “as never before on an opening night” of Corn Palace festivities, stated the Mitchell Daily Republican on Sept. 26, 1904. Sousa and his musicians “played into the hearts of the people” during that first concert.

The final concert at the Corn Palace was brought to a close when Sousa played his “Goodbye” number. Every section of the band played some popular tune of a goodbye nature, and after finishing it left the stage. Band members returned to the stage and played “The Stars and Stripes Forever.”

“The vast audience arose to its feet in deference to the great leader while the selection was being played,” reported the Mitchell Daily Republican. “The people cheered and waved their handkerchiefs to the March King. It was a moment of great enthusiasm and good cheer. The members of the band stood and played ‘Auld Lang Syne’ while cheer after cheer rent the air.”

On Saturday, Nov. 26, 1921, the band performed at the Corn Palace in the afternoon and at the Sioux Falls Coliseum in the evening.

In 1925, Sousa and the band performed in Aberdeen, Huron, Mitchell and Sioux Falls. The following year, concerts were given at Redfield, Huron, Miller, Watertown, Yankton and Vermillion.

At Vermillion, University of South Dakota professor Harold Clark accompanied the band on the pipe organ as it played Sullivan’s “The Lost Chord.” The boys of the Vermillion High School band joined the Sousa band to play two numbers.

Sousa and the band performed in South Dakota for the last time in 1928, with concerts in Aberdeen, Brookings and Sioux Falls.

The band leader’s mission in music was to raise the level of America’s appreciation, according to Bierley.

Those attending a Sousa concert could expect to hear classical and patriotic selections, Sousa marches and several soloists. Encores were played throughout the program rather than at the end.

The Yankton Press and Dakotan described the Sousa concert there as a “typical Sousa program, possessing a variety of appeal and possessing abrupt contrasts which invariably take his audience by storm.” The first part of the program consisted of the overture “Herod,” a cornet solo; a suite of selections by Strauss, Sullivan and Sousa; a soprano soloist; a piece by Tchaikovsky; and concluded with “The Stars and Stripes Forever.” The second half featured a new Sousa composition, a saxophone octet, a new Sousa march, a xylophone solo and an African dance selection.

Sousa’s charisma and his skill as a conductor were a major part of the band’s popularity.

“Throughout the concert it was the power of the great director, Sousa, which drew the attention of the audience and won their admiration,” stated the Vermillion Plain Talk on Oct. 28, 1926.  “With scarcely any gymnastics and only a few gestures he led his large band through the mazes of the most intricate passages with perfect ease and control. By this slight use of his wand he showed himself to be the great master of the baton.”

Sousa died at age 77 on March 6, 1932, in Reading, Penn., where he had gone to be guest conductor. He had composed 136 marches and played 15,623 live concerts with his Sousa band before laying down the baton for the last time.