October 2016-The Many Nicknames of South Dakota 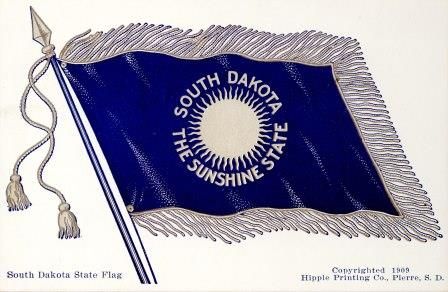 The Many Nicknames of South Dakota

Of all the nicknames for South Dakota, perhaps none is more unusual than” The Swinged Cat State.”

This nickname originated from remarks made by South Dakota’s first governor, Arthur C. Mellette, according to an article from the South Dakota State Historical Society – State Archives.

In 1890, South Dakota was in the midst of a drought. Mellette was doing everything in his power to help settlers and keep them from leaving the state. On a trip to Chicago for aid, Mellette was met by Moses P. Handy, a friend and newspaperman. Handy asked Mellette, “Well, governor, how is South Dakota?”

Mellette replied, “Oh, South Dakota is a swinged cat, better than she looks.”

By swinged, Mellette meant “burnt” or “singed,” according to the article.

The next day, the Chicago Inter Ocean newspaper had a story about Mellette, governor of the “swinged cat State.”

“Coyote State” might have been the its first nickname, and while most people probably assume the nickname was inspired by the state animal, it may actually have been inspired by a horse.

According to Volume IX of South Dakota Historical Collections Compiled by the State Department of History, a race took place in October 1863 at Fort Randall between horses owned by two soldiers from Company A Dakota Cavalry and a major from the 6th Iowa Cavalry.

The major’s horse was badly beaten.

A soldier from the Iowa infantry remarked “that the Dakota horse ran like a coyote.” The owners immediately gave their horse that name, which became applied to the entire Dakota Company and to all residents of the state.

With a nod to the number of artesian wells in the state, another South Dakota nickname is “The Artesian State.”

Weather is a factor in two of South Dakota’s nicknames. As “The Blizzard State,” it shares a nickname with Texas because of both states being subject to frequent storms.

“Everybody’s got a lot of sunshine, but we’re the only ones who’ve got Mount Rushmore,” he was quoted as saying in an article in the Jan. 26, 1992, Sioux Falls Argus Leader.

Getting the bill passed wasn’t all sunshine for supporters. Opponents argued that dropping the nickname “The Sunshine State” would cause people to think the state was in a “frozen tundra,” according to Republican Rep. Mary Edelen of Vermillion in the Feb. 1, 1992, Argus Leader. Others in favor of keeping the sun shining on South Dakota said that the state’s American Indian population did not want South Dakota to be known as “The Mount Rushmore State.”

legislation did pass and was signed into law by Gov. George S. Mickelson, who favored the new nickname.
Who knows what the future will hold for South Dakota’s nicknames? While “The Mount Rushmore State” might seem set in stone, clearly nicknames come and go.