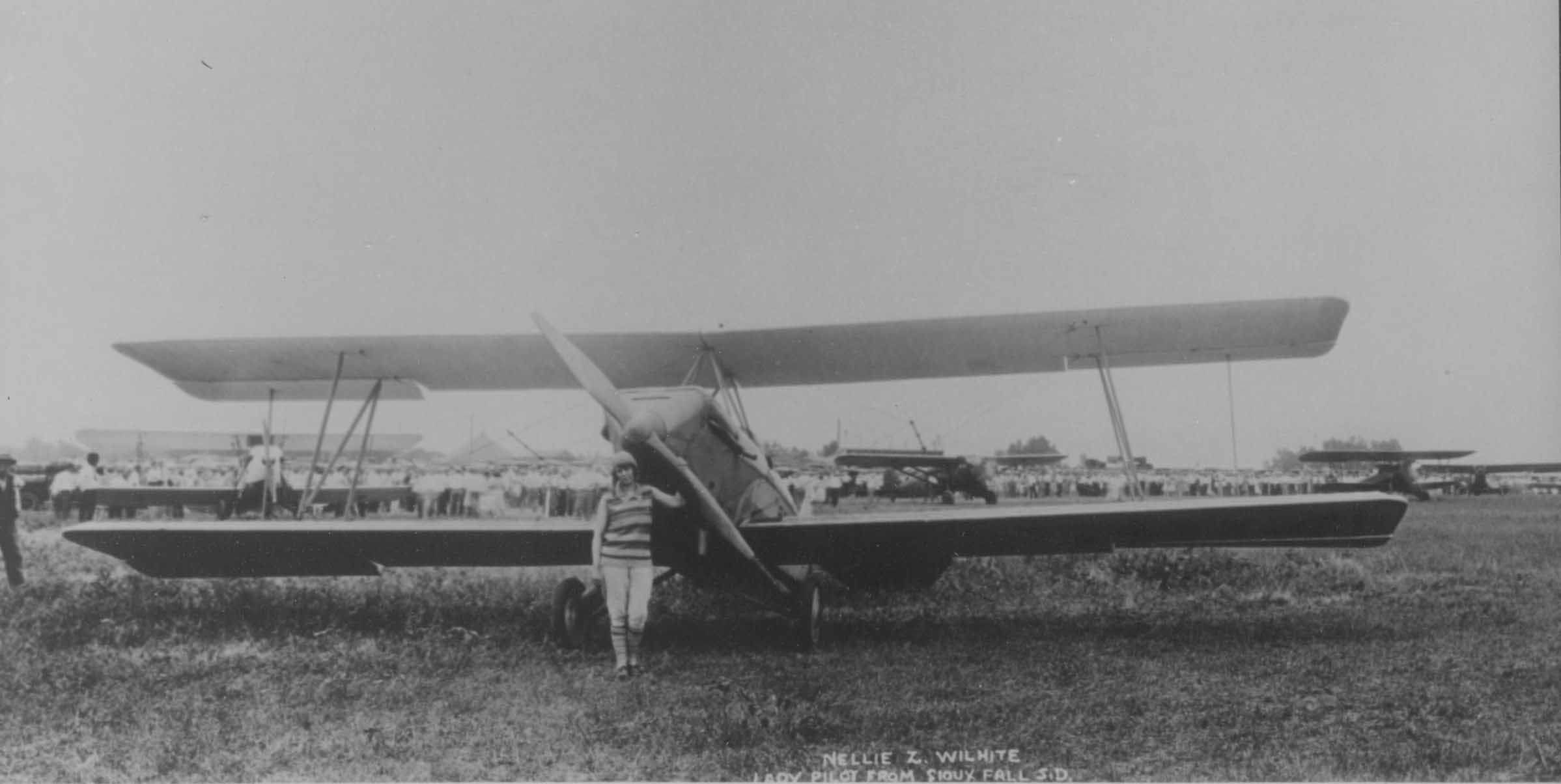 “Up and up, to a height of about 6,000 feet, she went soaring around above the field, banking, turning, diving and climbing. After about 10 minutes, she brought the ship gently to earth in a perfect landing, according to Mr. Tennant (Harold Tennant, who operated Dakota Airlines flight school and was the chief pilot for Dakota Airlines at Renner Airport) without a bump or a swing,” stated an article in the Jan. 22, 1928, Sioux Falls Daily Argus-Leader.

Willhite was born in the Black Hills on Nov. 22, 1892. Her father, Charles Zabel, was a freighter on the Fort Pierre to Deadwood Trail. A case of measles as a child severely impaired Nellie’s hearing. Her widowed father enrolled her at the South Dakota School for the Deaf in Sioux Falls. While in Sioux Falls, she met Leonard and Dollie Mead of Yankton and became their foster daughter. Leonard Mead was the director of what was later called the South Dakota Human Services Center. Nellie was briefly married to Frank Willhite.

By 1927, she was living in Sioux Falls and spending her weekends at the Renner Airport north of Sioux Falls watching the airplanes fly. Tennant told Willhite that if she learned to fly an airplane, she would be the first South Dakota woman to learn to fly, according to Norma Kraemer of Deadwood. Kraemer, who is also a pilot, met Willhite in the 1980s. Flying lessons cost $200, though. Willhite wrote her father, by then a postmaster in Sheboygan, Wis., about her desire to learn how to fly.

He replied, “Tomorrow is payday and I am sending $100, and next payday I will send you another $100 … I am sending you this under one condition and that is, that I don’t want you to pay it back.”

He added a postscript asking Willhite to be satisfied in just plain flying, for most of the accidents occurred when pilots were performing stunts. This letter is part of the Nellie Zabel Willhite Collection at the Center for Western Studies at Augustana University in Sioux Falls.

Willhite started her lessons in November 1927 at the Dakota Airlines flying school. After accumulating 13 hours of flying time, she soloed. In 1928, “solo” was considered “being a pilot,” according to Kraemer.

Zabel purchased an open cockpit biplane for Willhite for $2,750 after she convinced him to buy her a plane so she could make a living as a pilot. These open cockpit planes have none of the features or weather information of modern aircraft. The compass was on the floor between the pilot’s feet. The airspeed was sort of a reed that bent in the wind, strapped to one of the wing struts. The airplane’s water-cooled engine was prone to lines breaking and forced landings.

In response to a letter from Willhite asking what to name the plane, Zabel suggested his nickname of “Pard.”  “In fact, it would be a ‘Pard’ to both you and me … I suppose you will have the ‘13’ also,” Zabel wrote.

Willhite did have the word “Pard” and the number “13” painted on the plane. She considered 13 her lucky number as she was the 13th student to enroll in Dakota Airlines flight school and took her first solo flight after 13 hours of flying time on a 13th.

One of the first trips Willhite made once she had her own plane was to fly her father over the Fort Pierre to Deadwood Trail he had walked many times as a freighter.
“This was an ambitious trip for anyone in an airplane in 1928 with no aviation maps or radio navigation aids available,” Kraemer wrote in “South Dakota’s First Century of Flight.”

Willhite performed as a stunt pilot and raced other airplanes at fairs, air shows and airport dedications. She sold rides, charging passengers between 50 cents and $1.00 per ride and issuing them a souvenir ticket that bore her photograph and certifying that they flew with “Pard.”

Willhite sold “Pard” in 1932 when it became too costly to maintain. By 1937, the reality of how difficult it was to make a living as a pilot made Willhite realize that she needed to find another way to support herself. She continued to fly as a hobby, keeping her pilot’s license current into the 1950s, according to Kraemer.

Willhite overcame personal challenges throughout her life. She never viewed herself as handicapped, according to Kraemer.

The Ninety-Nines formed in November 1929 as a mutual support group for women pilots. The name came from the number of women pilots who were founding members. Willhite was one of the charter members. She organized the first South Dakota chapter in 1941.

Zabel’s fears of his daughter being killed in a plane crash proved groundless. Willhite died at age 98 in Sioux Falls.