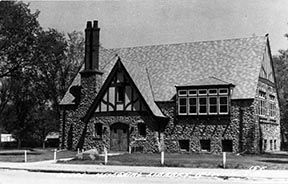 Four of the most significant buildings in Ipswich are associated with the Beebe family. The Beebe home, Ipswich State Bank building, Ipswich Baptist Church and the M.P. Beebe Library are all listed on the National Register of Historic Places. All are significant architecturally.

Arriving in Edmunds County in 1883, the year it was organized, Marcus Beebe became wealthy through large land holdings and by being instrumental in founding and later owning what became Ipswich State Bank. Marcus Beebe died in 1914. His widow, Leota, offered the Baptist congregation two-thirds of the cost of a new $25,000 building. The offer was accepted and $11,000 was pledged by church members. The Marcus P. Beebe Library was built by his widow and children as a tribute to him.

The buildings associated with the Beebe family are but four of the more than 1,300 individual properties and districts in South Dakota that are listed on the National Register of Historic Places.

To qualify for the National Register, properties must be at least 50 years old and be associated with historic events or people, represent distinctive architecture or construction, or provide important information about history.

The following is a small sampling of South Dakota properties listed on the National Register, with information about the property taken from its nomination.

Yankton’s Hotel Charles Gurney qualified for the National Register for its architecture and for the role it has played in the social and business life of the community.

The hotel was originally a three-story cottonwood structure built in 1870. This structure was demolished and a Richardsonian Romanesque structure built around 1890, one of the most striking buildings in Yankton at the turn of the century. Yankton served as capital of Dakota Territory from 1861 to 1883. The hotel serves as a link to the past. The trial of Jack McCall for the murder of “Wild Bill” Hickok took place in a courtroom in the hotel’s northern annex. It was a favorite meeting place for businessmen and politicians and served as a popular location for social gatherings for many generations.

The Rising Hail Colony, located about half a mile from the Missouri River in Charles Mix County, is agriculturally significant. In 1938, Congress voted appropriations for two colonies – one called Andrus and the other Rising Hail, named after an American Indian chief. From 30 to 50 Yankton Sioux, representing eight to nine families, pooled their money and belongings such as machinery, livestock and tools in an effort to restore their old lifestyle. By 1942, they shared an annual profit of approximately $13,000 and owned about 1,500 acres of land, numerous livestock, orchards, and fruit and vegetable gardens. By 1949, however, all but three families had moved away and the cooperative was dissolved.

The Rising Hail Colony is also significant for its architecture. The eight buildings all used chalk rock as their main construction material. This soft, bleached-white colored rock was taken from the banks of the nearby Missouri River.

While little remains of the Rising Hail Colony, the Hollands Grist Mill windmill in Milbank has been completely reconstructed. It is significant in the areas of engineering, settlement and industry. The mill was built in 1884 by English settler Henry Hollands in an effort to harness wind to grind wheat and corn and to saw wood. With a lack of significant water and other traditional power sources, wind was one of the most accessible power sources available in Dakota Territory.

The Gregory Buttes Stone Steps are an example of a Works Progress Administration project that employed local men and materials during the Depression. In 1936, WPA laborers gathered field stones from the surrounding area, cut them and placed them in 110 steps they had cut on the east slope of the Gregory Buttes. The steps lead from Gregory City Park up the slope of the buttes to an observation area. In 1936, the WPA employed almost 50,000 people in South Dakota. The WPA administered many types of programs, but the majority were construction projects.

Many buildings listed on the National Register have architectural significance. The Mitchell Lustron District is unique because the houses are concentrated in a small area.

The Lustron House was architecturally significant as an example of a new construction method for residential housing. All surfaces of the two- or three-bedroom houses were of enameled steel, making them durable and easy to maintain and giving them a sleek, modern look. The deluxe model contained many built-in features.

The houses were developed by Carl Strandlund as a response to the need for housing after World War II. Prefabrication of the house components and construction methods developed by the company meant a Lustron could be built in one to three weeks. The Lustron Corporation existed from 1946 to 1950 and produced approximately 2,500 houses before going bankrupt in 1950. There are approximately 38 Lustron Houses in South Dakota.

Information about all South Dakota properties listed on the National Register can be found at history.sd.gov by clicking on “Preservation.”