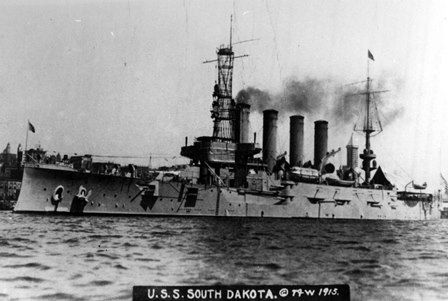 The official keel-laying ceremony took place recently for the new U.S.S. South Dakota attack submarine. This milestone for the third such vessel named in honor of our state signified the start of the vessel’s construction.

A significant milestone occurred in the life of the first U.S.S. South Dakota in 1904. On July 21, South Dakota Gov. Charles Herreid, his daughter Grace, and a party of 10 were in San Francisco to christen and launch the armored cruiser. Launching is the day the ship’s hull is put in the water.

Congress had authorized the building of the armored cruiser by Union Iron Works of San Francisco in 1900. Grace Herreid was the ship’s sponsor. In the Navy, a sponsor is the title given to a citizen chosen to christen a naval vessel. During the launching ceremony, the bishop of the Episcopal diocese of California gave a short prayer and Grace pressed a button that released the cruiser from its blocks. As the cruiser slid down the ways, Grace swung a bottle of champagne against the hull and bestowed the name U.S.S. South Dakota on the ship. Part of the figurehead, which is an ornament on the bow of a ship, was the South Dakota state seal in brass.

Commissioning is the day the captain assumes command on board. The U.S.S. South Dakota was commissioned in 1908. The time difference between launching and commissioning has to do with completing the outfitting of the ship and training the crew.

The first U.S.S. South Dakota was attached to the Pacific Fleet.

In 1914 Mexico was in the midst of civil war. President Woodrow Wilson sent American warships to waters off Mexico to protect American interests and property. The U.S.S. South Dakota with Marines on board kept the Mexican coast under surveillance by cruising up and down the shoreline.

After the United States entered World War I, the U.S.S. South Dakota joined the Atlantic Fleet. It patrolled the South Atlantic, operating from Brazilian ports, searching for German vessels. In 1918, the cruiser escorted troop convoys from the East Coast to the mid-Atlantic rendezvous point where British cruisers joined the convoy. Following the signing of the armistice, the U.S.S. South Dakota made two voyages from France to New York to return troops to the United States. The wartime crew consisted of 700 regular Navy men and 500 naval reservists.

In the summer of 1919, the U.S.S. South Dakota was ordered back to the Pacific to serve as flagship of the Asiatic fleet, which consisted of 26 vessels including eight destroyers. The flagship is the ship carrying the flag officer or commander of a fleet, and displaying the officer’s flag.

The U.S.S. Huron served in the Asiatic Fleet for seven years. When Japan was hit by a devastating earthquake in 1923, the U.S.S. Huron helped bring clothing, food, medical supplies and other items to Japan.