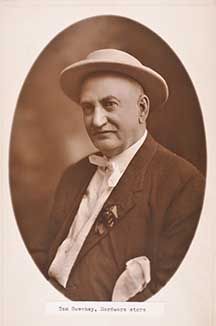 “Tom Sweeney wants to see you.”

“One man in Rapid City was always ready to meet the stranger within the gates with a smile of welcome and a hearty handshake,” stated an article in the Rapid City Daily Journal upon Sweeney’s death in 1917. “Many a stranger in the city has found his first friend to be Tom Sweeney. Many a visitor to the city has been led to better acquaintance with this man by the sign, ‘Tom Sweeney wants to see you.’ And Tom did. He wanted to see all of the people who came to this section of the state because he was so full of the satisfaction of his home.”

In 1886, Sweeney built a three-story brick building with 42,000 feet of floor space on the southwest corner of Main and Seventh streets to house Tom Sweeney Hardware Company. The business, of which Sweeney was president, treasurer and general manager, had the most extensive and varied stock of merchandise in western South Dakota. It had expanded from a business that sold new and second-hand hardware into a department store that carried almost every kind of commodity the community needed, except food and drugs.

Among the items sold was the roundup stove. This was a portable stove invented by Sweeney that was sold throughout the West. It was considered the most complete and convenient stove of its kind on the market.

Sweeney had extensive interests in the livestock industry in South Dakota and Wyoming, being among the largest cattlemen in the Black Hills, according to “History of South Dakota” by state historian Doane Robinson.

By 1904, the Sweeney Hardware Co. employed 14 men, including plumbers, saddlers, harness makers, blacksmiths and wagon makers, according to Robinson.
“All through the Hills you used to see his slogan: ‘Tom Sweeney wants to see you.’ And, for one reason or another, he really meant it,” wrote Robert J. Casey in the book “The Black Hills.”

Sweeney had the ability to make the customer feel important, Casey wrote. Casey’s own experience in entering the store for the first time was being greeted by Sweeney, who conveyed the impression that Casey had made the whole day brighter just by coming through the door.

Sweeney’s personal touch extended beyond handshakes and friendliness in the store. He also wrote letters to customers, thanking them for their past business and calling their attention to certain merchandise.

Like other business owners of early Rapid City, Sweeney offered liberal credit. An advertisement for the hardware store stated, “We are after the man with the moderate income. The more limited your means, the more reason why you should buy your merchandise here, for then you are sure of the longest service and best satisfaction.”

Sweeney never held public office, but he was known as a one-man chamber of commerce.

One of the first companies of the Rapid City Fire Department was named the Sweeney Hook and Ladder Company in honor of the merchant, and a baseball team also bore the hardware store’s name.

Sweeney married Mary Wells in 1883 in Rapid City, and they lived in a house at the corner of Quincy and 11th streets. A card group known as the Razer’s Club often met at the Sweeneys’ home on Saturday nights.

It was on a trip to Rapid Valley to sell liberty bonds in support of the Allied cause in World War I that Sweeney was fatally injured. The vehicle in which he was a passenger was struck by a freight train engine while crossing railroad tracks in Rapid City.  Sweeney was thrown from the vehicle and died of his injuries a day later, on Oct. 25, 1917.
“His death came in such a way that it was typical of his whole life. He was even then engaged in a mission for this city, his state and his nation,” stated the Rapid City Daily Journal in reporting remarks made by the four speakers at the memorial service at the Elks Theater.

Burial was in Mountain View Cemetery in Rapid City.

The hardware store was later sold. The building stood for more than 100 years, until destroyed by a fire in 1997. The owners of the property rebuilt on the site.

The pioneer businessman has not been forgotten, as the Minnilusa Pioneer Museum in Rapid City displays a replica of the wagon wheel hub that stood outside Sweeney Hardware Store’s front door and a chair that was bought at the hardware store.

“There will never be another like him, for they are not made. He was a type unto himself, and in his death Rapid City loses one of her very best friends,” stated the Rapid City Daily Journal.