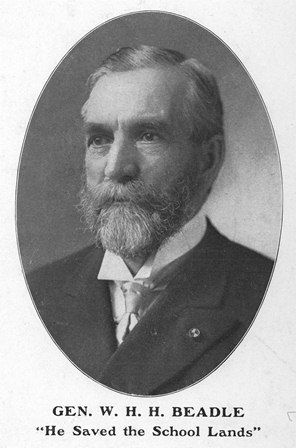 The Savior of School Lands

“Some men have doubted if I were ever of any use whatever to the territory or the state, but I have never retaliated in any way, believing that life is too short and duty too obligatory for hate and malice.”

Gen. William Henry Harrison Beadle, who spoke those words, was considered by many to have played a valuable role in the history of Dakota Territory and South Dakota. Beadle is regarded as instrumental in helping establish the public school system in the Dakotas and with safeguarding school land and the income from it.

Beadle was 31 years old when he came to Dakota Territory in 1869, appointed by President Ulysses Grant as surveyor general of the territory. He later served as private secretary to Territorial Gov. William Howard and was superintendent of public instruction from 1879 to 1885. Beadle was among those present at the Rev. Stewart Sheldon’s home in Yankton on Thanksgiving Day in 1879. This Thanksgiving dinner meeting is said to have been the true beginning of the movement of statehood for South Dakota. Statehood was granted on Nov. 2, 1889.

At the time Dakota Territory was being surveyed, an ordinance adopted and later amended by Congress specified that sections 16 and 36 in each township should be sold or rented to create a fund that would support public education. A section contains 640 acres.

Beadle knew that public-school land was being sold to speculators for $1.25 to $2.50 per acre in states to the east.

While journeying to the territorial capital of Yankton in 1869, Beadle wrote in his memoirs that he told his traveling companion that the school lands “were the great trust of the future commonwealth and should be absolutely secured from waste and cheap sales.”

Beadle traveled throughout Dakota Territory and used every effort to impress upon people the importance of saving the school lands from falling into the hands of speculators. Beadle’s philosophy was that the school lands should not be sold rapidly; that the land should be appraised by a responsible board of directors; that school land should not be sold for less than its appraised value and never less than $10 an acre; that sections that might contain minerals were not to be sold for less than their appraised values; and that all money raised from the sale of school lands be safely invested as a permanent school fund and only the interest from that fund could be used for operating schools.

Beadle wrote the section into the state constitution that ensured that none of the school land could be sold for less than $10 an acre and that established a trust fund for education. Congress compelled other states which came into the union at the same time or later to include the same principles and provisions in their state constitutions regarding the school lands and permanent school funds.

Beadle was appointed president of Madison State Normal School in August of 1889. A normal school was a school created to train high school graduates to be teachers. Its purpose was to establish teaching standards, or norms, hence its name. Beadle recognized the need for adequately trained teachers who would be able to handle rural children. Beadle served as the school’s president for 16 years, and then continued as a history professor until 1912. The college was renamed General Beadle State Teachers College in his honor in 1947 and is now called Dakota State University.

Beadle assisted in organizing the South Dakota Education Association. When the cornerstone of the state Capitol was dedicated on June 25, 1908, Beadle gave the address.

Beadle was honored in his lifetime when a life-size marble statue of him was placed in the Capitol in Pierre. School children had contributed pennies and nickels to a fund promoted by the SDEA. Beadle was present at the dedication on Nov. 27, 1911. The Pierre Daily Capital-Journal reported after the program that “hundreds met General Beadle, who during the ceremonies had been a silent witness stationed near the speaker’s stand.”

A replica of the statue was placed in Statuary Hall in the nation’s Capital in 1938 to mark the centennial of the birth of South Dakota’s Grand Old Man, as some called Beadle. A statue of Beadle is also located on the campus of Dakota State University.

Beadle died on Nov. 13, 1915, while visiting his daughter in San Francisco. He is buried at Albion, Mich., where his wife was buried.

Beadle’s name lives on in South Dakota with a county and several schools that bear his name. But his most important legacy is that because of his foresight, the interest and rental income from the sale and leasing of school lands has helped finance public education in South Dakota. The office of School and Public Lands returns approximately $12 million to school districts and endowed institutions each year from money generated from grazing, mineral, oil and gas leases, interest on the Common School Permanent Fund, and interest on land sales contracts.