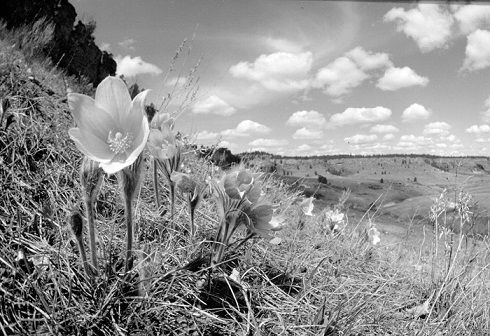 “That bold bit of life at the edge of the snows” is how South Dakota poet laureate Badger Clark described the state flower in his 1939 poem Pasqueflower.

The pasqueflower is a wildflower that reaches eight to 12 inches in height. Each stem has one cup-shaped flower with five to eight petals that range in color from dark lavender to almost white. Silky hairs cover not only the leaves but also the stems and buds. As one of the first flowers to bloom in the spring, it is a reminder of life’s springing anew out of a wintry death.

Pasque refers to Easter and Passover, and it is around that time of year that the plant blooms. On the prairies and plains of South Dakota, pasqueflowers typically bloom in late April and early May. In the Black Hills, the wildflower may flower well into May and June. In most cases, by June the flowers and fruits are long gone and by the end of July even the leaves are gone – dormant until the following year.

In a piece of folklore written in the Dakota language contained in the North Dakota publication Native Life, a pasqueflower speaks as a grandparent addressing grandchildren. The pasqueflower tells the grandchildren that she has come out first of all the flower people to show that spring is here and that the buffalo will increase. Then, when all the other flowers, birds and animals have come out, it is time for her to die. By this example, she shows the grandchildren that they must become old and gray, and pass on to the next land that has been prepared for them by their ancestors. The pasqueflower will return again in early springtime, speaking her message to generation after generation.

The Lakota name for the pasqueflower is ‘hoki cekpa,” meaning “child’s navel.” The wildflower has many other names as well, including windflower, prairie crocus, meadow anemone, May flower and Easter flower.

According to information from the South Dakota State Historical Society – State Archives, Lawrence Riggs, a teacher at Peoria School in Hughes County, asked the state legislature that the pasqueflower and the motto “I Lead” be adopted as the state floral emblem. In his letter dated Feb. 4, 1903, he also requested that the lesson “Be first in Love and Peace and Faith in Immortality” be added, and that the flower and motto be given an honored place in the state seal and flag.

The South Dakota Educational Association, which represents teachers, had previously passed a resolution urging the legislature to adopt a floral emblem of the anemone or pasqueflower and the motto “I Lead.”

A bill signed into law on March 5, 1903, by Gov. Charles N. Herreid approved the pasqueflower, along with the motto “I Lead,” as the floral emblem of South Dakota. South Dakota is the only state to have incorporated a motto with its state flower.

It would not be until 40 years after the pasqueflower was declared the state flower that South Dakota would have its next state symbols. The ring-necked pheasant was designated the state bird and Hail, South Dakota by Deecort Hammitt was named the state song, both in 1943.

Since then, the triceratops has become the state fossil, kuchen has been named the state dessert and many more items have been designated as state symbols to signify what is important to the state.

But it was the first flower of spring that led the way as South Dakota’s first state symbol.