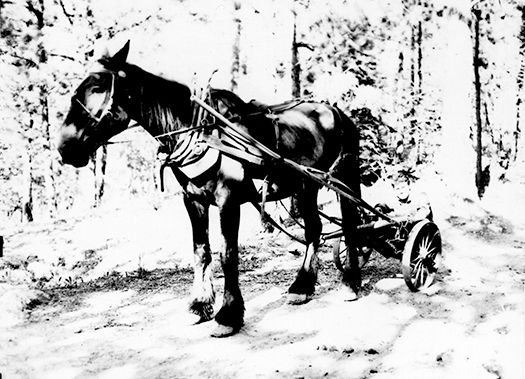 Historical markers across South Dakota indicate the location of Civilian Conservation Corps camps, telling the stories of the CCC and the work done at the camps. But one need only look at our state’s landscapes to know this would be a much different place without the work of the men of the CCC.

The Civilian Conservation Corps was a major part of President Franklin D. Roosevelt’s New Deal. Begun in 1933, the CCC was originally designed to preserve natural resources, provide jobs for single men ages 18-25 and to help their families financially during the Great Depression. Most of the men who worked for the CCC received pay of $30 a month in addition to room and board, with $25 a month sent home to support their families. Later, the allotment going home was reduced and camps were established for World War I veterans.

More than 30,000 men served in the South Dakota corps between 1933 and 1942, according to the website of the CCC Museum of South Dakota, located in Hill City.
The majority of the 50 CCC camps and smaller side camps in South Dakota were in the Black Hills.

Enrollees in the Black Hills thinned forests; planted trees; developed trails; removed flammable debris; built bridges, dams, roads and fire towers; put up telephone lines; landscaped and fought forest fires. According to the CCC museum’s website, fighting fires consumed much of the men’s time because summers were so dry. A fire detail of at least 25 men remained in each camp, prepared to immediately respond when a fire was reported.

The largest and most difficult project undertaken in the Black Hills National Forest by CCC crews was building the stone fire lookout tower at Black Elk Peak.
All the building materials had to be transported up the mountain.

Approximately 7,500 rocks were hand-picked from French Creek and the surrounding countryside and transported by truck to the foot of the nearly 4-mile trail leading to the 7,242-foot peak. Small two-wheeled carts consisting of half of an oil drum mounted on a short axle were pulled by one horse to transport rocks and other items to the top. These carts, called “Ben Hur Chariots,” could haul only 15 to 20 stones per trip. Pack trains of 10 horses each were used to transport sand and sacks of cement to the summit. On the way up the trail each man carried a board or other light item. CCC workers dammed a spring at the top of the peak to use for water to make cement and mortar.

Some of the lakes in the Black Hills are the result of CCC projects. Sheridan Lake was created after CCC and Works Progress Administration crews built an earthen dam over Spring Creek. Dams built by CCC crews created Horsethief, Stockade, Center and Bismarck lakes. Orman Dam and the surrounding irrigation ditches were rehabilitated by CCC workers.

Although the majority of the CCC camps were in the Black Hills, camps were also located in eastern South Dakota.

CCC workers turned Farm Island near Pierre and American Island near Chamberlain into recreational playgrounds. Among the projects at Farm Island were building a causeway connecting the mainland to the island; picnic areas equipped with shelter cabins; cabins for Boy Scouts, Girl Scouts and Izaak Walton League; and a monument to the Lewis and Clark Expedition. At American Island, enrollees built tourist cabins, a bath house, racetrack, roads and parking areas, and planted shrubs, trees and shelterbelts.

At the CCC camp at Alcester, men demonstrated soil and water conservation. The men planted trees in Union County State Park and established a tree nursery at Vermillion. Tours showing results aided in the organization of conservation districts in Clay, Union, Bon Homme and Lincoln counties.

Camp LaCreek near Martin was part of a national CCC program to develop waterfowl refuges. The CCC and WPA built levees, roads, boundary fence and an observation tower and planted thousands of trees and shrubs to develop the 9,302-acre Lacreek National Wildlife Refuge.

Following the attack on Pearl Harbor on Dec. 7, 1941, the Roosevelt administration directed federal programs to emphasize the war effort. The 77th United States Congress ceased funding the CCC, and operations were concluded on June 30, 1942.