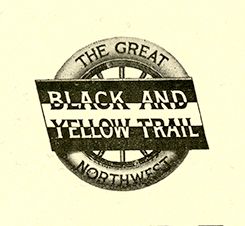 H.L. Kyes had one product to sell tourists, and that was getting from one place to another over the Black and Yellow Trail.

The Black and Yellow Trail grew out of a national good roads movement to improve roads for the benefit of residents, farmers and tourists. At that time, in the 1910s and 1920s, roads were bad and many were not joined together. Trail associations were established to mark, maintain, promote and seek funds to improve roads.

“During the most of the trip the roads have been excellent, and South Dakota’s showing of good roads is reported by the pathfinders to be a very good one,” reported the Pierre Weekly Free Press. “The people at every point visited have been very congenial, meeting the party with automobiles, banqueting them, and accompanying them to the next stop. There has been as many as forty automobiles in the party at one time, and the reception along the route of travel indicates that there is a keen interest in this part of the country in the Black and Yellow Trail.”

The travelers from Chicago were met in Blunt by autos from Pierre and escorted to the capital city. In Deadwood, the pathfinder cars were greeted with dynamite bombs exploded from white rocks 500 feet above the city and a long string of autos from Deadwood and Lead.

Only the brave and hardy traveled the dirt trail until after World War I, according to John E. Miller in “Looking for History on Highway 14.”

“The road over the so-called Black and Yellow Trail between Pierre and Rapid City is a joke as any tourist who has been over it will testify,” read a July 13, 1917, letter by Elmer Juckett that appeared in the Hot Springs Weekly Star. The road between Fort Pierre and Philip was poorly marked and had never been graded, he wrote, so it apparently was “but one single track or rut made by cars which every tourist must follow.” The road from Wasta to Rapid City was rough.

As there were no numbered highways, symbols were used to mark a route to let travelers know they were on the right path. The mark of the Black and Yellow Trail was a yellow band about 10 inches wide between two black bands of about the same width. This mark was placed on telephone poles, boulders and other structures.

Towns along the route were encouraged to establish free campgrounds for tourists.

At a session during the state meeting, South Dakota State Historian Doane Robinson encouraged delegates to have good markers along the trail in their communities emphasizing historic and scenic points, saying that tourists wanted to see all the country offers and didn’t want to search for that information. The conclusion of Robinson’s speech drew the most response from delegates. As stated in the association’s minutes:

“Mr. Robinson suggested converting some of the massive Black Hills needles into statues of men connected with South Dakota history. While at first thought this would seem a lifetime undertaking it has been given serious thought and is entirely within the range of possibility. Incidentally, as put before the meeting by Mr. Robinson, it would take comparatively a very short time and the added tourist business during the time the work was in progress would bring many times the cost into the state and – the statues would be standing for generation after generation. Let’s put it over.”

Robinson’s idea would become Mount Rushmore National Memorial and its carving and completion did, no doubt, increase traffic along the Black and Yellow Trail.

Today much of the route of the Black and Yellow Trail in South Dakota is U.S. Highway 14 and is promoted by the South Dakota Department of Tourism as “genuine Americana.”