June 2017-J.W. Parmley and his Quest for Good Roads 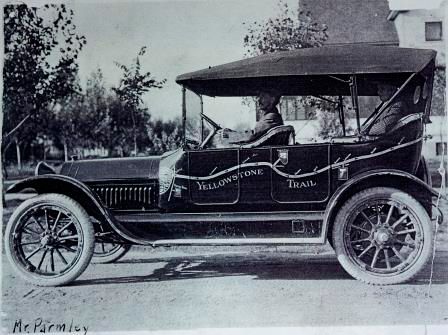 Long before the television show “The Amazing Race,” Joseph Parmley was making what one newspaper described as “the most remarkable run in the history of the state.”

“This is an important day in the history of the Yellowstone Trail,” read an article in the Pierre Weekly Free Press referring to an event on May 15, 1915. “At 4 o’clock this morning, J.W. Parmley, of Ipswich, president of the association, left Lemmon in a Studebaker Six for a trip across the state, which he expects to finish at Ortonville, Minn., at 8 o’clock this evening, making the 349 miles in 16 hours.”
It was a feat many considered impossible.

Parmley, 1861-1940, was a driving force behind the establishment of the Yellowstone Trail Association in 1912. The association’s goal was to create a high-class transcontinental highway from Plymouth Rock to Puget Sound with the hope it would attract travelers to Yellowstone National Park and open the Northwest to tourists.

At the time, roads weren’t marked, there were few maps and mud was the usual road surface.

Parmley set out to prove that travelers from the east need not fear selecting the Yellowstone Trail as the route west by dashing off in the dawn to travel the entire distance of the Trail in South Dakota in less than a day.

A race driver from Kansas City, W.R. Payne, drove the Studebaker Six that was furnished by W.C. Nissen, the Studebaker distributor in Aberdeen. Parmley and Payne were accompanied by a mechanic and representatives of Aberdeen newspapers. Accounts of the journey were given in the Aberdeen Daily News and Aberdeen Daily American.

Cheering crowds in every town along their route sped the party on its way. The racers also encountered the nemesis of travelers: muddy roads.

Despite losing track of the trail and plowing through mud hub-deep, the group arrived in Aberdeen at 2 p.m., only 10 minutes behind schedule.

“Hundreds of people lined the streets to see the car arrive and at the W.C. Nissen garage a huge crowd had collected, which set up a mighty cheer as the car swept down the street and slid into the garage on high gear,” read the Aberdeen Sunday American, the Sunday edition of the Aberdeen Daily American. “The crowd swarmed up to the car in their enthusiasm and it was with difficulty that the waiting mechanicians adjusted new (mud) chains to all the tires and filled the gasoline tank.”

Good roads between Aberdeen and Ortley enabled the car to reach Ortley exactly on schedule. The party was ready for a flying trip down the grade into Big Stone City.

“Upon leaving Marvin, however, they encountered the worst piece of road on the trip,” read the article in the Aberdeen Sunday American. “The road was in many places covered with water from the rains, which had assumed almost the magnitude of a cloud burst. The grade through here is rather low, necessitating the car to travel on intermediate and low speed the entire distance. As was the case along the western part of the trip, the carburetor filled with water from the road bed, necessitating a stop to drain it.”
The band was playing and crowds had gathered when the mud-plastered Studebaker arrived at Ortonville at 8:15 p.m.

The vehicle failed to make the run in 16 hours, “but everybody there considered that despite this fact the car had made the most remarkable run in the history of the state, and with decent weather could have cut two hours from the running time easily.”

Parmley became known as “The Father of the Yellowstone Trail,” now U.S. Highway 12. A man of vision and action, he helped bring about the International Peace Garden and advocated for many special projects such as soil conservation, diversified farming, building dams to create artificial lakes and beautifying towns by planting flowers on vacant lots.