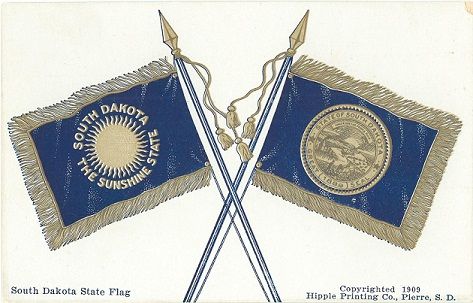 Blue skies and sunshine translate to a perfect summer day. Those elements are reflected in South Dakota’s flag.

The story of the state’s banner began in 1909, when State Sen. Ernest May of Deadwood walked into the office of the State Department of History in Pierre. He discussed the need for a state flag with state historian Doane Robinson.

“Turning to me, Robinson said, ‘Miss Anding will make you a flag,’” Ida (Anding) McNeil said in an article in the Jan. 20, 1963, Rapid City Daily Journal.

McNeil, a legislative reference librarian at the time, designed and made a flag that featured a blazing sun in the center of a field of blue, with the words “South Dakota” above the sun in the arc of the circle and “The Sunshine State” below the sun in the arc of the circle. McNeil said in the newspaper article that Robinson suggested a blazing sun emblem because of South Dakota’s many days of sunshine. McNeil showed the sample flag to Robinson, who remarked that the Great Seal of the State of South Dakota would look nice on the other side. McNeil agreed, and the state seal set against a field of dark blue was placed on the reverse side.

A bill adopting the state flag was passed by the Legislature in 1909.

“If I had known as much about flags as I do now, I certainly would have left the reverse side plain,” McNeil said in the Rapid City Daily Journal article. “A two-sided flag is very difficult to make. In addition to the added work, it is difficult to prevent one side from showing through onto the other.”

McNeil explained in the newspaper article that to make the state flag, she appliqued the golden sun and embroidered the sun’s rays. She then took another piece of silk, painted details of the state seal on it and appliqued this to the reverse side of the flag. In addition to being difficult to make, a two-sided flag was expensive to produce. The silk material from which McNeil made the flag cost $12.50 per yard and the materials for one flag cost about $75 in 1963.

McNeil left her state job when she married in 1921. Although she made the first state flag, she is better remembered for being a pioneer in radio broadcasting. She became known as “Mrs. Pierre” while owner and operator of KGFX radio in Pierre.

Another version of how South Dakota’s flag came into being states that May told Robinson that Deadwood pioneer Seth Bullock wanted a state flag. Robinson makes no mention of Bullock’s involvement in the state flag in Doane Robinson’s Encyclopedia of South Dakota. David A. Wolff of Spearfish, author of Seth Bullock: Black Hills Lawman, said that he could find no evidence in his research on Bullock to support the idea of Bullock being involved in the first state flag.

During the 1963 legislative session, Rep. William Sahr of Pierre introduced a bill to modify the state flag. The new one-sided flag kept a sun with a serrated edge on a field of sky blue but placed the state seal inside the sun. Around the sun were the words “South Dakota” and “The Sunshine State.”

The state’s banner was again revised in 1992, when the Legislature approved changing the wording on the flag to read “The Mount Rushmore State” instead of “The Sunshine State.” This reflected a change in the state nickname.

Not everyone likes our state flag. The North American Vexillological Association, an association of flag experts, ranked South Dakota’s flag as one of the five worst in North America in 2001.

During the 2012 legislative session, a bill to adopt a flag designed by Spearfish artist Dick Termes was introduced. This design featured a sunburst, an American Indian medicine wheel and concentric blue circles. A House committee rejected the call to look at revising the flag.