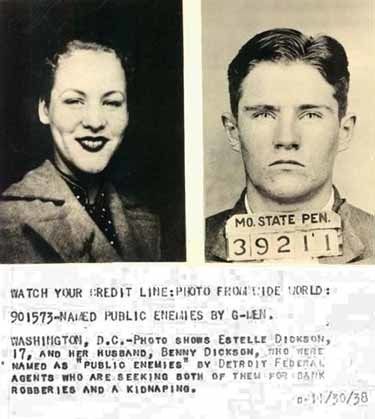 The young couple was at the bank to make a withdrawal. Of other people’s money. At gunpoint.

As reported in the Elkton Record, a man judged to be about 34 to 36 years old entered the Corn Exchange Bank at Elkton on the afternoon of Aug. 25, 1938, and announced, “This is a holdup.”

After being told by the cashier that the delayed time lock to the vault would not open for 35 minutes, the bandit waited . As customers with deposits entered the bank, the man had the bank cashier look up their bank balance. The bandit did not take their money if the bank balance was low, but took it if he decided the loss could be well afforded.

Those inside the bank had noticed that a second person, holding what appeared to be a small machine gun, initially stood guard outside the bank. When this second party entered the bank, “it was then that those who got a good view became certain that this assistant was a girl of rather young years and of slight build,” stated the Elkton Record.

When the lock opened, the man hurled himself into the vault and gathered up all the cash on hand. The two bandits left town with more than $2,000.

On Oct. 31, 1938, two people who were described in the Brookings Register as a “pasty faced man about 30 years old and a young attractive blonde” robbed the Northwest Security National Bank in Brookings. This time, the bandits told bank officials to “do business as usual” while they waited about two-and-a-half hours for the timed bank vault to open. The duo left Brookings with about $15,000 in cash plus stocks.

The Brookings Register reported that based on descriptions of the robbers provided by bank employees, it was possible they were the same two who had robbed the bank in Elkton.

Although authorities had good physical descriptions of the robbers, they did not know their identities.

Bennie was born in 1911 in Topeka, Kansas. He served time in the Kansas State Reformatory for car theft and spent seven years in the Missouri State Penitentiary for bank robbery. After his parole in 1937, he met 15-year-old Stella, also of Topeka, and they married in 1938.

In the months after the bank robberies, authorities pursued the Dicksons through several Midwestern states. Stella earned the nickname “Sure Shot” Stella when she shot out the tires on a pursuing patrol car. The Dicksons added kidnapping and car theft to their crimes.

The bank holdups came under the jurisdiction of the Federal Bureau of Investigation. The FBI issued nearly 1,000 news releases nationwide about the Dicksons, according to Matthew Cecil in a 1999 edition of “South Dakota History,” the quarterly publication of the South Dakota State Historical Society.

“Described as desperate criminals by federal officials, both Dickson and his wife are known to be extremely dangerous and the public is warned that they would just as soon shoot to kill whoever gets in their way,” read the Brookings Register of Dec. 1, 1938.

On April 7, 1939, Bennie was shot and killed in St. Louis by FBI agents as he was coming out of the Yankee System Hamburger shop. Newspaper articles stated that Dickson, 27, failed to heed a command to put up his hands and instead reached for a gun.

Cecil contends that wasn’t the case. He contends a waitress who witnessed the shooting said Dickson was fleeing and trying to open a door leading to an apartment when on agent shot him twice, once in the back and once in the side, mortally wounding him.

The story that appeared in newspapers was that she waited in the car while her husband went into the hamburger stand.

“A few minutes later I saw a man down the street wave his arm. I didn’t think anything about it at the time. I couldn’t see the hamburger stand very well because of the cars parkied in front of it,” Stella said.

“I heard several shots fired across the street. I already had the motor running, and I swung the car around to get on Johnny’s (her nickname for her husband) side of the street and opened the car door as I turned.

”Johnny was lying on the sidewalk.”

She denied taking part in the bank robberies or the kidnapping of which the couple was accused, the Sioux Falls Daily Argus-Leader reported.

Stella was taken to South Dakota and held in the Davison County jail while awaiting trial In U.S. Federal District Court in Deadwood.

She pleaded guilty to two counts of bank robbery and was sentenced to two concurrent 10-year terms in the women’s federal reformatory at Alderson, W.Va.

After being paroled, she lived a quiet life and died in 1995.

But were the Dicksons the dangerous public enemies that the FBI portrayed them to be?

According to Cecil, an internal FBI memoranda corroborated the waitress’ version of Bennie’s shooting. The waitress was warned not to make public her account of Dickson’s death. Cecil suggests that the public’s fascination with criminals and small-time outlaws like the Dicksons provided the FBI with an opportunity to improve its image as a modern crime-fighting agency.