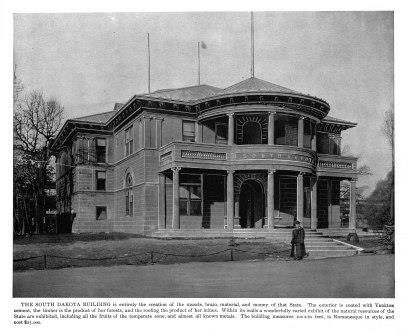 “Any person who can take in the world’s fair and does not do so, makes a great mistake, and they will surely regret it as long as they live,” read an article in the June 8, 1893, Turner County Herald in Hurley, published by William C. Brown.

It’s no wonder. The editor and his wife had spent 10 days taking in the sights at the World’s Columbian Exposition of 1893, also known as the Chicago World’s Fair. The fair had opened on May 1, 1893, to commemorate the 400th anniversary of Christopher Columbus’s arrival in the New World. Those attending the fair on the south side of Chicago adjacent to Lake Michigan would have seen buildings that stretched a third of a mile long, the world’s first Ferris wheel, exhibits from 86 foreign countries, buildings representing 43 states and territories, and much more.

“The South Dakota State building was not only a surprise to strangers, but to many of our own people,” stated the Report of the South Dakota World’s Fair Commission, made to Gov. Charles Sheldon. “Situated on the 57th street entrance, near the gate, it was in the path of all visitors passing in or out of the grounds at that gate. The building itself was a very important state exhibit. The outside walls were covered with the Yankton Portland cement; the beauty of color and flint-like hardiness attracted much attention. The front entrance was under a large arch composed of Sioux Falls quartzite and Black Hills sandstone, supported by two beautiful, polished quartzite columns.”

Those entering the 100-foot by 60-foot building saw rooms packed with agricultural, commercial and mining displays. The main exhibit hall held more than 100 varieties of wheat, oats and other cereals. An arch was made of 14-foot cornstalks loaded with large ears and the sign, “We want you to know that South Dakota is a corn state.” The wool growers’ exhibit was considered “the best arranged wool exhibit on the grounds.” There was also a ladies’ and gentlemen’s parlor, bathrooms, gentlemen’s reading and smoking room, private offices and storage rooms.

The purpose of the South Dakota Building was to showcase the state’s advantages in order to encourage immigration and to correct erroneous impressions people might have of the state, then 4 years old, according to the commission’s report. South Dakota was in dire straits, as the loss of crops to drought had caused the state’s economy to crash and forced many South Dakotans to leave the state or accept outside aid.

Due to the state’s treasury troubles, private citizens provided much of the financing of the building.

The guest registers were 17 inches thick, 25 inches high and 26 inches wide, and had a combined weight of 400 pounds, according to the fair commission’s report. The guest registers are now in the safekeeping of the South Dakota State Historical Society in Pierre.
Most of the fair’s buildings were designed to be temporary structures, removed after the fair closed.

While the fair was underway, Old Main at the University of South Dakota in Vermillion was destroyed by fire. Many of the materials from the South Dakota Building were saved and found new life in building a new Old Main.