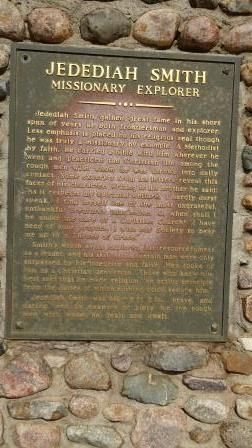 Jedediah Smith carried a rifle and a Bible.

When a fellow fur trapper died, Smith gave what was recorded as a “powerful prayr.”

This powerful prayer is considered the first recorded public act of Christian worship by white men in South Dakota. It is commemorated on historical markers at The Bay at Grand River Casino, near Mobridge.

A mural painted by Charles Holloway depicts this act on the ceiling of the House chamber in the South Dakota Capitol. Titled “The Peace that Passes Understanding,” it is the largest mural in the Capitol.

“It would be a mistake to view Smith as a rough-and-ready frontiersman in buckskin. He was a deeply religious person and cultured gentleman whom even the giants of the fur trade, Ashley, Fitzpatrick and William Sublette, respected and admired,” according to “The Reader’s Encyclopedia of the American West,” edited by Howard R. Lamar.

According to information on the historical markers, Smith was “a Methodist by faith, he carried a Bible with him wherever he went …”

Smith was born in Bainbridge, N.Y., in 1798 or 1799, depending on the source. In 1822, Smith accompanied Gen. William Ashley on Ashley’s first fur trapping expedition from St. Louis to the upper Missouri River. A year later, Smith was with Ashley’s second expedition up the Missouri River when it was attacked by the Arikara near the mouth of the Grand River in present-day South Dakota. The attack left more than a dozen fur trappers dead, and the rest fleeing for their lives.

John Gardner was one of those killed. In “Hugh Glass: Grizzly Survivor,” James D. McLaird writes that before Gardner died, he asked Hugh Glass, another member of the party, to inform his parents of his sad fate. Glass did so, stating in the letter that “Mr Smith a young man of our company made a powerful prayr wh moved us all greatly and I am persuaded John died in peace.”

To avoid the river route, Ashley later split the party into two groups and sent them overland to the mountains from Fort Kiowa, located near present-day Chamberlain.

Part of the party, including Glass, set out west for the Yellowstone River. Glass was mauled by a grizzly bear near the Grand River and left for dead. Glass’ story has been told in books, poetry and movies.

Smith led the other party west toward the Black Hills. The group camped the first night along the White River. In his book “Journal of a Mountain Man,” expedition member James Clyman described the land as treeless and wrote that it took two days of thirst and starvation to cross a large bend in the White River. When water was finally found, Clyman wrote that Smith “took Some water and rode about 2 miles back bringing up the exhausted men which he had buried in the sand.”

They apparently entered the southern Black Hills through the Buffalo Gap, an opening in the Black Hills where buffalo entered and left the high country. Smith and his men are considered the first whites to enter the region, according to “The Roadside History of South Dakota” by Linda Hasselstrom.
In what some sources report was in the vicinity of Wind Cave and others in the Powder River Basin of Wyoming, a grizzly bear surprised and mauled Smith, breaking some of his ribs and laying his skull bare. Smith asked Clyman to sew up his wounds, which Clyman did.

The winter of 1823-24 was spent at the site of present-day Dubois, Wyo. Smith and his group learned from a group of friendly Crow Indians of an easy pass around the southern end of the Wind River Mountains. Although South Pass had been used before by whites, its discovery was forgotten and Smith and his party are credited for bringing South Pass to general knowledge.

was well on his way to becoming one of the most famous of mountain men. In addition to rediscovering South Pass, Smith was the first American to enter California from the east and return from California using an overland route. He opened a coastal trade route from California to Fort Vancouver on the Columbia River. He filled in many of the missing pieces of western geography and demonstrated that there were feasible routes across the West to California and Oregon.

In 1830, Smith decided to leave the life of a mountain man. He sold his shares in his fur trading company and bought a house in Saint Louis. He was persuaded to take one more load of goods to Santa Fe, N.M., though, leaving in the spring of 1831. Smith was killed by Comanches while riding alone ahead of his party trying to find water along the Santa Fe Trail near the Cimarron River.