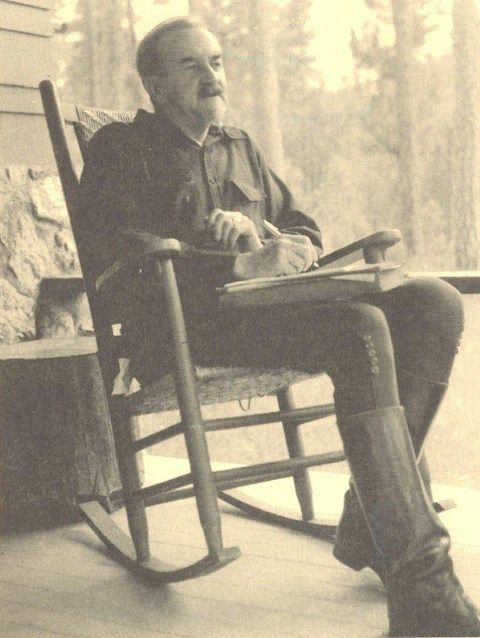 Badger Clark turned four years of cowboy life into a career as one of America’s most successful cowboy poets.

Charles Badger Clark Jr., was born Jan, 1, 1883, in Albia, Iowa. His father, a minister, moved the family to the Plankinton area three months later. The family later lived in Mitchell, Huron and Deadwood. Clark attended Dakota Wesleyan University for one year and then lived in Cuba for two years before returning to the Black Hills to work for the Lead Daily Call. When he was diagnosed with tuberculosis, he followed a doctor’s advice to move to a dry climate. He went to Arizona, where he tended a small herd of cattle at a ranch near Tombstone.

“I drearily acknowledge that I was no buckaroo worthy of the name,” Clark wrote.

The compensations he found from cowboy life were freedom and the beauty of the desert range. He expressed his feelings for his new life in verse.

His stepmother, Anna, sent a poem he included in a letter to her to Pacific Monthly magazine in California. When that poem, “Ridin’,” was published and Clark received $10 for it, he decided he had found a job for life.

“If they’ll pay money for such stuff as that, I’m fixed,” Clark said, according to his biographer Helen Morganti.

Clark returned to South Dakota after four years in Arizona. Anna encouraged her stepson to write a poem reflecting the cowboy religion. Clark told her that he had heard cowboys use biblical expressions, but not in the context of a religious nature, according to Jessie Sundstrom in “Badger Clark: Cowboy Poet with Universal Appeal.”

Nonetheless, Clark did comply with his stepmother’s request, which resulted in one of his most popular poems. “A Cowboy’s Prayer” has appeared on postcards, in greeting cards and is read at rodeos.

The fact that the poem is often attributed to “author anonymous” did not seem to bother Clark.

“Mr. Anonymous has written some marvelously good things in the past and when a man reaches a height where he is identified with Anonymous, that’s success,” Clark is quoted as saying.

Clark took his poems to the people, reading them at schools, colleges, clubs, churches and other gatherings. A commanding presence with a Van Dyke mustache and beard, he would recite his verse wearing knee-high boots, riding breeches and a military-style coat.

He is credited with speaking at the first cowboy poetry event in Elko, Nev., where he entertained a large crowd at the Elko High School gym on April 3, 1926. He was honored at the 2013 National Cowboy Poetry Gathering in Elko when an ensemble cast of artists from across the West recited or sang their favorite work of his.

Often speaking for “travel and meals,” honorariums from his speeches and publishing royalties earned him $500 to $700 a year, enough to live at his cabin in Custer State Park. Clark described his home, the Badger Hole, as “four rooms and a path.” It had no running water, no electricity and was heated by burning wood in the range, the fireplace and in a round heater in the living room.

“Sufficient,” he said, “for a bachelor in the backwoods.”

Although never married, Clark was once engaged to a classmate at Deadwood High School, according to Sundstrom.

Gov. Leslie Jensen named Clark the South Dakota poet laureate in 1937, but Clark may have preferred another title, as he signed a letter, “Dutifully your poet lariat, Badger Clark.”

Clark remained the state’s poet laureate until his death from throat and lung cancer in Rapid City on Sept. 27, 1957.

He left a poetic heritage rich in beauty and an understanding of the American West.