July 2014 - The Twin Banners of the Twin States 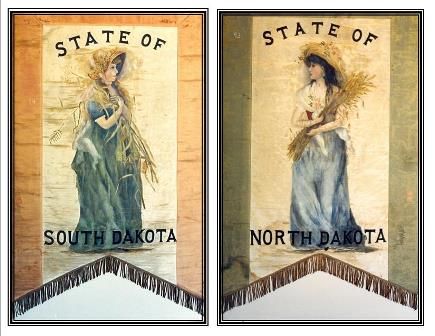 Banners have been rallying points throughout history.

Those attending a statehood convention in Huron in 1888 rallied around banners that symbolized Dakota Territory being divided and admitted to the Union as sister states
.
The division question was a key issue in the struggle to achieve statehood during the 1880s. Dividing Dakota Territory into two states pitted those whose fortunes depended on political influence in the territorial system centered in Washington, D.C., against those who saw a greater potential benefit coming from state and local control. The division question had to be resolved before admittance to the Union.

On July 10, 1888, a statehood convention was called to order in Huron. By the convention’s conclusion, delegates supported division and had devised a plan to make division and admission the greatest issue in the upcoming territorial election.
A large crowd filled the 1,200 seat Grand Opera House for a public meeting the evening of July 11 to witness the presentation of banners.

Each swallow-tail banner of white silk was 26 inches wide by 40 inches long, sewn by a group of women from Huron. One banner bore an oil painting of a dark-haired young woman holding a sheaf of wheat within a blue border and the words “State of North Dakota.” The other banner featured a fair-haired young woman holding a stalk of corn within a crimson border and the words “State of South Dakota.” The paper labels fastened to each banner’s border read, “painted by Mrs. Huron” and “presented by Mrs. Mellette.”

Mrs. J.T. Ohlwine, wife of local insurance agent James T. Ohlwine, presented the South Dakota banner to Territorial Secretary George Hand of Yankton. Hand told how it was customary during the Civil War for women to present companies and regiments with flags which were carried into battle.

He presented the banner to the crowd with these words: “Men of South Dakota, behold your banner. And beholding swear in your hearts before God that you will never cease your lawful efforts until victory is gained. If in the days to come discouragements shall appear, think of the fair hands that wrought this banner … Swear that it shall never be trailed in the dust of defeat and dishonor.”

Flora Gans, listed in the 1885-86 Huron city directory as clerk for the Dakota Mutual Insurance Company, presented the North Dakota banner to Waldo Potter. Potter was a Fargo businessman and early supporter of dividing Dakota Territory.

In accepting the banner, Potter said: “It is a gem in workmanship, this emblem of young statehood, as is that of its twin banner presented to South Dakota. Together they aptly represent the sister Dakotas, soon, as we believe, to belong to the sisterhood of states, and as twin stars to shine forever on the gorgeous field of the flag of the republic.”

An article about the division convention from the Minneapolis Evening Press that appeared in the July 14, 1888, Daily Huronite, stated, “The great convention has made ‘Home Rule for Dakota’ a rallying cry.”

The banners were displayed on the stage at a territorial convention at Watertown in August 1888, according to an article by Jeanne Brako, conservator at the Rocky Mountain Regional Conservation Center.

The momentum which began on July 10, 1888, resulted in a victory for division supporters. Two states, North Dakota and South Dakota, were admitted into the Union on Nov. 2, 1889. President Benjamin Harrison shuffled the proclamations when he signed them so he could not tell which was joining the Union first.

U.S. Secretary of State James G. Blaine telegraphed the governors of the newly admitted states, “This is the first instance in the history of the National Government of Twin States. North and South Dakota entered the Union at the same moment.”