January 2021-The Travels of Kittie the Stagecoach 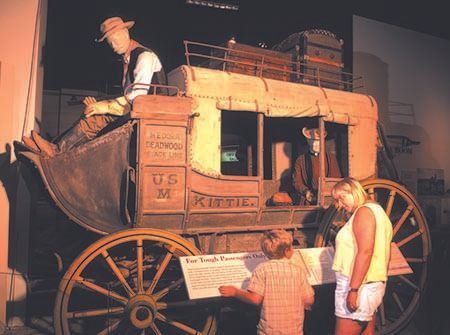 The Travels of Kittie the Stagecoach

Kittie was welcomed warmly when she returned to South Dakota.

She’s the stagecoach now displayed in the museum of the South Dakota State Historical Society at the Cultural Heritage Center in Pierre.

“The Governor (George S. Mickelson) unveiled the stagecoach in January at his third annual reception for the South Dakota Legislature, and she was very well received. The stage now is on display in the exhibition wing,” wrote J.R. Fishburne, then the director of the South Dakota State Historical Society, in a 1991 letter.

Kittie was one of four stagecoaches used by the Medora Stage & Forwarding Company to transport passengers and freight between Medora and Deadwood, Dakota Territory. The company was organized by the Marquis de Mores, a wealthy Frenchman who had come to what is now the North Dakota badlands in 1883 and founded the town of Medora, named after his wife. The gold fields in the Black Hills were already connected with stage lines from the east, south and west. The Medora Stage & Forwarding Company would connect Deadwood to Medora, which was connected to the Northern Pacific Railroad, on the north.

Four used Concord stagecoaches and harnesses were purchased from Gilmer, Salisbury and Company, a freight and stage transportation firm. The stagecoaches were named Kittie, Medora, Dakota and Deadwood, and the name of each stagecoach was painted on it. De Mores hoped that the company would be awarded a contract to carry mail, and the letters “U S M” for United States Mail were also painted on each coach in anticipation of being awarded the contract. The company established 13 stations over the 215-mile stretch between Medora and Deadwood and purchased 150 well-bred western stage horses. Each station had a tender, who cared for the horses and served the passengers when necessary. In South Dakota, the route passed near Buffalo and through Belle Fourche and Spearfish before reaching Deadwood.
The first stagecoach to roll into Deadwood from Medora arrived about noon on Sunday, Oct. 5, 1884.

“It created a great deal of enthusiasm as it passed up Main street, drawn by six horses,” stated The Black Hills Daily Pioneer in Deadwood.

Three cheers were heartily given as the stagecoach halted in front of the ticket office.

The stage headed back to Medora the next day.
The trip between Medora and Deadwood took about 36 hours and cost passengers $21.50 or 10 cents a mile.  Stages departed from both Medora and Deadwood on Monday, Wednesday and Friday mornings and arrived at their destination the evening of the following day.

The business venture quickly folded, however, as Mores failed to get the mail contract he had hoped for  as well as the freight business needed in order for the venture to financially survive.

The May 28, 1885, issue of the Turner County Herald carried the news that “The Medora Stage Line to the Black Hills has been abandoned.” Other sources state that the Medora Stage & Transport Company ceased to exist in the winter of 1885-1886.

De Mores’ other business ventures in Dakota Territory also failed, and the de Mores family moved back to France. The Marquis was murdered in 1896 while in Africa.

Kittie’s history did not end with the Medora to Deadwood stage.

In 1896, Andrew Olson of Pelan, Minn., purchased the coaches Kittie and Medora from the estate of the Marquis, according to Paul Englund. He wrote the South Dakota State Historical Society, “My great-grandparents were probably the last people to have a route with that coach (Kittie) when they ran it between Karlstad and Greenbush, Minnesota. Just prior to that they had a way-station along the route between Stephen and Roseau in northwestern Minnesota. The ‘Kittie’ ran between Stephen and Pelan (the half-way point) and the ‘Medora’ ran between Pelan and Roseau.”

The coming of the railroad in the early 1900s resulted in the collapse of the stage line.

Eventually, Harry Miller of Jamestown, N.D., went to Roseau, Minn., and returned to Jamestown with Kittie.

Kittie appeared in all the city’s parades, according to a letter to the South Dakota State Historical Society from Mary F. Young of Jamestown. A photograph taken in 1936 shows South Dakota Gov. Tom Berry in a parade in Jamestown, riding on a stagecoach that was identified as Kittie.

Miller eventually moved to California and left Kittie and another stagecoach in Jamestown. In a letter written from California in 1949, Miller stated that a man in Jamestown was looking after the stagecoaches. “They have been standing in the open more or less since I came out here during the war,” he wrote.

By 1969, according to an article in the Minot, N.D. Daily News, the stagecoaches Kitty and Medora were owned by Osborne (Ozzie) Klavestad of Shakopee, Minn. He owned a tourist attraction in the form of a pioneer village. A bill of sale indicates that Klavestad sold two stagecoaches in 1980.

In 1990, the South Dakota State Historical Society obtained Kittie from a private collector.

The stagecoach’s presence in the museum is a reminder of this historic and once invaluable form of transportation.